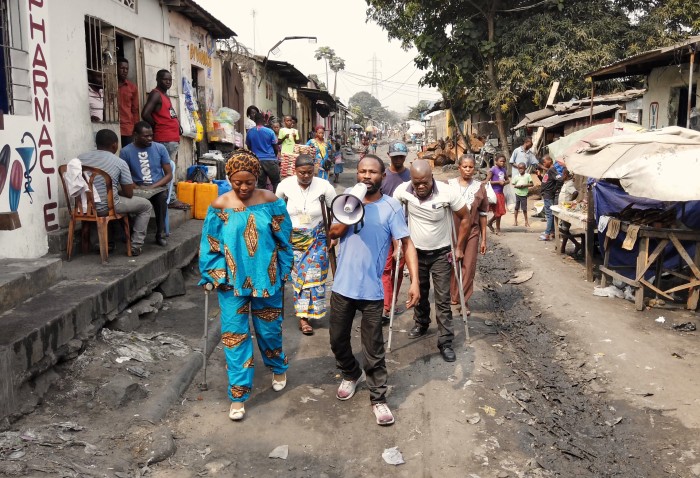 Season 14 of AfroPoP: The Ultimate Cultural Exchange, the acclaimed documentary series showcasing contemporary stories from all corners of the African diaspora.

Launches this spring with true-life tales of Black artistry, advocacy, and activism.

The series, which serves as a perennial reminder that #BlackStoriesMatter, begins its newest season on WORLD Channel and worldchannel.org on April 4, 2022, at 8 p.m. ET (5 p.m. PT).

“The 14th season of AfroPoP shines a light on the collective power, strength and resilience of Black people and movements around the world,” said Leslie Fields-Cruz, AfroPoP executive producer. “Viewers will see artists use their platforms to push for progress and human rights and see ‘ordinary’ people do the remarkable in the interest of justice.”

The broadcast premieres of Everything: The Real Thing Story; She Had a Dream; Downstream to Kinshasa; Restitution? Africa’s Fight for Its Art; and Revolution from Afar introduce viewers to dynamic individuals and remarkable stories set in the United Kingdom, Tunisia, the Democratic Republic of Congo, Nigeria, France, Côte d’Ivoire, Germany, Sudan and the United States.

“We are delighted to again partner with Black Public Media on AfroPoP’s 14th season, as we work to provide educational, inspiring, and transformative content from a variety of countries and cultures across the African diaspora,” said Chris Hastings, executive producer for WORLD Channel at GBH in Boston. “This season’s episodes bring to life the personal struggles, setbacks and triumphs of activists and innovators, set against significant cultural and political movements.”

Everything: The Real Thing Story, the internationally acclaimed film directed by Simon Sheridan, is the season opener (April 4). The documentary follows four other “lads from Liverpool” who formed the chart-topping soul and funk band, The Real Thing. Dubbed “The Black Beatles” by the British tabloids, they rose from obscurity to break barriers while navigating discrimination and the pitfalls of stardom— and singing about social conditions ahead of the times. Awarded five stars by The Guardian, which called it “the searing saga of Britain’s soul pioneers,” the film features surviving members of The Real Thing along with international recording artists including Billy Ocean and David Essex reflecting on the importance of the group to music in the UK and beyond.

She Had a Dream, directed by Raja Amari (April 11), introduces audiences to Ghofrane, a young Black Tunisian woman whose activism pushes her into a run for political office a decade after the Arab Spring. Her journey of ambition and advocacy has its highs and lows, and shines a light on the often insurmountable prejudices faced by Black women everywhere.

Downstream to Kinshasa, directed by Dieudo Hamadi (April 18), travels to the Democratic Republic of the Congo to capture the treacherous trip from Kisangani to Kinshasa that several surviving victims of the Six-Day War — all now living with permanent injuries or amputations from the conflict — embark on to plead their case for compensation two decades after the tragedy. The film has received several awards at festivals including the Cleveland International Film Festival, Toronto Film Festival and the International Festival and Forum on Human Rights.

Restitution? Africa’s Fight for its Art, directed by Nora Philippe (April 25), goes to the heart of the international debate about African art, looted by colonizers and populating museums across the Western world, and the fight for the return of the masterworks and religious idols to their rightful countries.

Revolution from Afar, the award-winning documentary directed by Bentley Brown (May 2), closes the season with a crop of young poets and musicians advocating in support of the revolution in Sudan that followed the 2019 toppling of the dictator Omar al-Bashir and military takeover of the country. Gathering in Brooklyn and Denver, these vibrant young people, whose families left Sudan years earlier reflect on their identity. Are they Sudanese? American? And how can they best help the Sudanese people an ocean away? The film won Best Feature Documentary at the 2021 Hip Hop Film Festival.

For more information, visit www.WORLDchannel.org. For more on the new season of AfroPoP: The Ultimate Cultural Exchange, visit blackpublicmedia.org or worldchannel.org.

WORLD shares the best of public media in news, documentaries, and programming. WORLD’s original series examines the issues and amplify the voices of those often ignored by mainstream media.

The multicast 24/7 channel helps audiences understand conflicts, movements, and cultures from around the globe. Its original work has won a Peabody Award, an Alfred I.

duPont-Columbia Award, a National News and Documentary Emmy Award, two Webby Awards, and many others honoring the diversity of content and makers. WORLD is carried by 195 member stations in markets representing over 75.1% of US TV households.

Funding for WORLD Channel is provided by the Corporation for Public Broadcasting, the John D. and Catherine T. MacArthur Foundation, Wyncote Foundation, and the National Endowment for the Arts and Artworks. WORLD is produced by GBH in partnership with WNET and is distributed by American Public Television (APT).

Find out more at WORLDChannel.org.