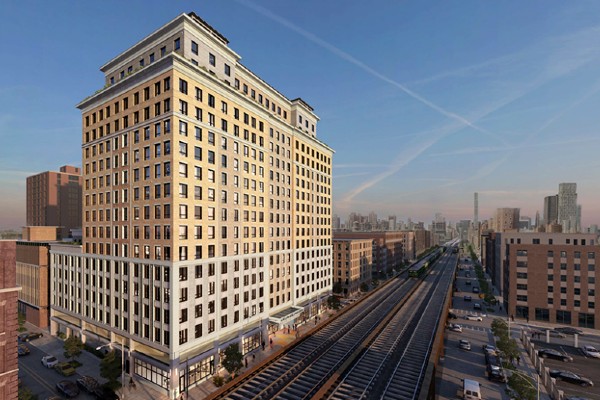 In addition, there are nearly 600 new affordable homes to the neighborhood of East Harlem.

The projects will construct mixed-use developments across two East Harlem sites and include a 16,000 square performance arts center operated by the Afro Latin Jazz Alliance (ALJA) and a newly renovated East Harlem Multi-Service Center to provide a range of social services, including after-school programming. Most new homes will serve low-income families earning less than $86,000, and 174 of the 600 homes are reserved for formerly homeless households.

“These incredible projects are delivering on the City’s commitment to invest in job training, youth, education, and more affordable housing for East Harlem. They are also proving that affordable housing can be an anchor for the arts and the entire community’s well-being,” said HPD Commissioner Louise Carroll. “I am so proud to announce plans for both the new Afro-Latin Music and Arts Center and renovated multi-service facility that will enhance the community’s quality of life. I want to thank our partners, The Community Builders, Ascendant Neighborhood Development, Mega Contracting, Lantern Organization, and the Afro Latin Jazz Alliance for their creative and thoughtful leadership.”

The two projects deliver on the East Harlem rezoning commitments and build on the community-led East Harlem Neighborhood Plan. The plan sets forth the community’s vision for addressing its affordability challenges through investments in affordable housing, education, workforce development, and support for neighborhood small businesses and nonprofits. It was developed through years of community engagement and consensus-building with hundreds of residents, stakeholders, and elected officials. Additionally, the selected proposals honor the unique cultural heritage of the East Harlem community.

Located on the east side of Park Avenue between East 118th Street and East 119th Street, the former New York Police Department 25th precinct parking site will be transformed into a residential building with 330 affordable homes, of which 99 homes will be set aside for formerly homeless households. The development, called “Timbale Terrace,” will also house the Afro-Latin Music and Arts (ALMA) Center, operated by the Afro Latin Jazz Alliance (ALJA).

The winning proposal came from a partnership between the Lantern Organization and Mega Development for a new 16,000 square foot, a state-of-the-art performing arts center with a double-height performance space. The new ALMA center will include practice rooms, community performance and art gallery spaces, recording studios, and street-facing retail. In addition to hosting professional musical performances, the community partner ALJA will offer free or affordable music education programming for all ages, job training in the arts, and run an anti-gun initiative through the new center.

“East Harlem is the community that best represents the mission of the Afro Latin Jazz Alliance, to use music as an entry point for service to the community and to reflect back to that community the beauty and ingenuity of its citizens,” said Arturo O’Farrill, Founder, Artistic Director, Afro Latin Jazz Alliance. “Partnering with the City of New York, the Lantern Organization,v and Mega development is an opportunity to put theory into daily practice. We are honored to lock arms with these partners and serve the people of East Harlem in a manner designed by their needs. Timbale Terrace will be a place that welcomes all!”

“Lantern Organization is thrilled to partner with the City of New York, Mega Development, and the Afro Latin Jazz Alliance to create Timbale Terrace,” said Dan Kent, President/CEO, Lantern. “We are grateful to the East Harlem community members who inspired this project through their advocacy for mixed-income housing, housing for vulnerable populations, and art and cultural center dedicated to this incredible neighborhood. We look forward to working with our neighbors to ensure Timbale Terrace achieves these shared goals for East Harlem.”

“Crafting a vision for Timbale Terrace was a labor of love for our team,” said Mega principal Hercules Argyriou. “Throughout our process, we were dedicated to creating a new mixed-use project that would address the needs articulated by the East Harlem community — 100% affordable housing that prioritizes those most in need with art and cultural center that celebrates East Harlem’s history and activates the Park Avenue corridor. In partnership with Lantern Organization and the Afro Latin Jazz Alliance, we are honored to have the opportunity to realize our vision for this important location.” 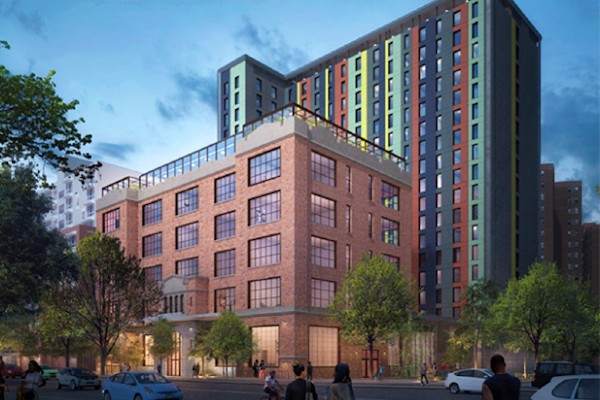 The Community Builders and Ascendant Neighborhood Development will develop the second site located at 413 E. 120th Street, to be known as “The Beacon.” The East Harlem Multi-Service Center site will give rise to an affordable 250-home residential building, of which 75 homes or 30 percent will be set aside for formerly homeless households. The new residential building will be constructed at the back of the existing East Harlem Multi-Service Center, which will be rehabilitated and expanded.

The original architecture of the multi-service center will be preserved and include additional space for after-school programming, a new atrium, green space, and the “Wagner Walk” walk path connecting the residential building to the multi-service facility. The renovated facility will continue to host the nonprofit organizations serving East Harlem.

“At TCB we pride ourselves on building and sustaining strong communities where all people can thrive,” said Desiree Andrepont, Senior Project Manager at The Community Builders. “It is a privilege to partner with Ascendant Neighborhood Development Corporation and brings together the East Harlem community with this exciting project. The transformation of the Multi-Service Center will create a collaborative space to unite neighborhood leaders, local organizations, and the greater community, and the development will provide much-needed affordable housing for generations to come.”

“For over thirty years, Ascendant has worked with our partners and allies to preserve, protect, and celebrate the unique history and heritage of East Harlem,” said Chris Cirillo, Executive Director at Ascendant Neighborhood Development Corporation. “We are profoundly grateful to have the opportunity to re-envision the Multi-Service Center as a sustainable, resilient, and inclusive 21st-century community hub. We look forward to working with community members, Wagner Houses residents, Multi-Service Center tenants, Community Board 11, Council Member Ayala, and all of the other stakeholders who have helped to shape the vision for this site and the broader neighborhood.”

The City selected developers and their winning proposals from the competitive East Harlem RFP released in 2019, which sought plans to redevelop two sites that include affordable housing alongside retail and community services.

After a series of community meetings, the EHNP was issued with 232 recommendations for addressing key neighborhood issues. In addition to authorizing the Mandatory Inclusionary Housing program for East Harlem, the rezoning creates opportunities for economic development while preserving the community’s existing commercial and manufacturing uses.

Related:  3 Rescued After Fire Breaks Out Inside Apartment Building In East Harlem

Additionally, the City announced the East Harlem El Barrio Community Land Trust (EHEBCLT) alongside a $13.2 million project to convert four city-owned buildings into affordable housing under the CLT’s ownership. The EHEBCLT is the first CLT to receive public land, capital financing, and startup support from the City in decades. Under the model, a board of tenants, community members, and nonprofit leaders will oversee and operate the development as an affordable rental mutual housing association.

Since the rezoning, the City has financed over 7,500 affordable homes in East Harlem. The zoning changes also support the construction of stations in the next phase of the Second Avenue Subway by planning for needed elevators, station access, and ventilation facilities.

Afro-Latin Jazz Alliance (ALJA) performs, educates about, and preserves the music of all of the Americas, emanating from African and indigenous roots, through the entry point of jazz. ALJA embraces its mission with a commitment to social justice, equity, inclusion, and the equality of all cultures worldwide.

Lantern Organization is a reputable nonprofit, affordable housing developer that provides permanent and affordable housing options for special needs and low-income populations. Lantern is one of New York City’s largest supportive housing providers for young adults who have aged out of foster care.

The Community Builders is an established nonprofit, affordable housing developer with nationwide experience. Their regional office has undertaken complex new construction projects in the Rockaways, Yonkers, and the Bronx.

Ascendant Neighborhood Development Corporation (“Ascendant”) builds homes, engages community members, and partners with allies to raise up neighborhoods that provide stability and access to opportunity for all.

The New York City Department of Housing Preservation and Development (HPD) is the nation’s largest municipal housing preservation and development agency. Its mission is to promote quality housing and diverse, thriving neighborhoods for New Yorkers through loan and development programs for new affordable housing, preservation of the affordability of the existing housing stock, enforcement of housing quality standards, and educational programs for tenants and building owners as stated by the NYC.Gov.

HPD is tasked advancing the goals of the City’s housing plan – a critical pillar of Your Home NYC, Mayor de Blasio’s comprehensive approach to helping New Yorkers get, afford, and keep housing in these challenging times. For full details visit www.nyc.gov/hpd