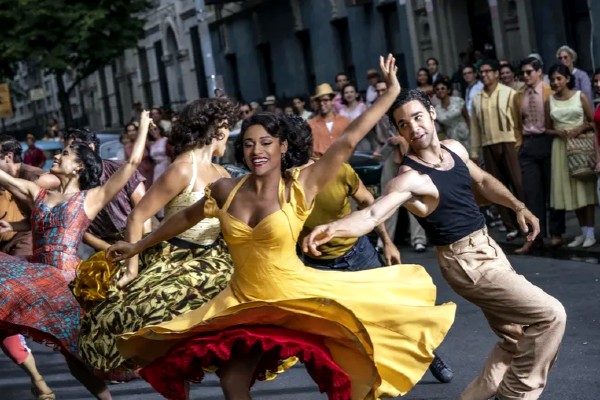 No one but Spielberg could have brought it off, creating a movie in which Leonard Bernstein’s score and Stephen Sondheim’s lyrics blaze out with fierce new clarity.

Spielberg retains María’s narcissistic I Feel Pretty, transplanted from the bridal workshop to a fancy department store where she’s working as a cleaner.

This was the number whose Cowardian skittishness Sondheim himself had second thoughts about. But its confection is entirely palatable.

Spielberg has worked with screenwriter Tony Kushner to change the original book by Arthur Laurents, tilting the emphases and giving new stretches of unsubtitled Spanish dialogue and keeping much of the visual idiom of Jerome Robbins’s stylized choreography.

This new West Side Story isn’t updated historically yet either is it a shot-for-shot remake.

This new West Side Story isn’t updated historically yet either is it a shot-for-shot remake. But daringly, and maybe almost defiantly, it reproduces the original period ambiance with stunning digital fabrications of late-50s New York whose authentic detail co-exists with an unashamed theatricality.

On the big screen, the effect is hyperreal as if you have somehow hallucinated your way back 70 years on to both the musical stage for the Broadway opening night and also the city streets outside.

I couldn’t watch without gasping those opening “prologue” sequences, in which the camera drifts over the slum-clearance wreckage of Manhattan’s postwar Upper West Side, as if in a sci-fi mystery, with strangely familiar musical phrases echoing up from below ground.

The original story was famously based on Shakespeare’s Romeo and Juliet, but with one very important difference.

The Jets and the Sharks, unlike the Montagues and Capulets, are not “both alike in dignity”: the Jets are white, with a structural advantage over their Puerto Rican enemies, and this production, with consistent Latino casting for the Sharks, points up the white cops’ tribal similarity to the Jets, in a kind of co-belligerent neutrality.

The scene is the rubble of the Upper West Side in 1958 where decaying tenements are being bulldozed for the fancy new Lincoln Center.

Ansel Elgort plays Tony, a young white man and the ex-Jets member who this movie imagines being just out of prison for an act of violence that has scared him away from getting involved in gang warfare.

Now he’s staying at Doc’s drugstore: or rather his landlady is the widow of the late Doc, Valentina, marvelously played by Rita Moreno, who was Anita in the original 1961 version.

This was an Anglo-Latino love match, the future that Tony and María should have had. 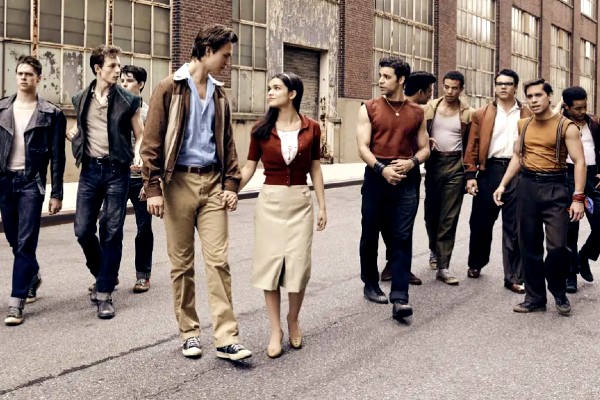 Tony’s best buddy is Jets’ leader Riff, played by Mike Faist, whose sharp face has the wizened, coarsened look of someone much older, and Riff desperately wants to enlist Tony for a new planned rumble with the Puerto Rican Sharks who are encroaching on their territory in growing numbers, and this new movie lets us see that queasy subtext of Protestant distaste for Catholic growth-rate.

The Sharks’ leader Bernardo (David Alvarez) has a fiery relationship with his girlfriend Anita (an exuberant, smart Ariana DeBose) and is oppressively protective of his sister Maria: a gentle, wistful performance from newcomer Rachel Zegler.

Tony and Maria meet and fall for each other at a local dance and their transgressive affair for a microsecond shows everyone the possibility of a modern, non-sectarian future – but ends in violence.

And in fact, the tragedy of errors that concludes the drama is more plausibly plotted than anything Shakespeare wrote.

Elgort and Zegler are a more real pair than Richard Beymer and Natalie Wood in the original: but they have the same fundamental innocence and quaint pre-pop, pre-youth-culture 60s unworldliness.

West Side Story is contrived, certainly, a hothouse flower of musical theatre, and Spielberg quite rightly don’t try hiding any of those stage origins. His mastery of technique is thrilling; I gave my heart to this poignant American fairytale of doomed love.

West Side Story is contrived, certainly, a hothouse flower of musical theatre, and Spielberg quite rightly don’t try hiding any of those stage origins.

His mastery of technique is thrilling; I gave my heart to this poignant American fairytale of doomed love reports Peter Bradshaw for The Guardian.

West Side Story is released on 10th December 2021, in the US and UK, and on 26 December worldwide.