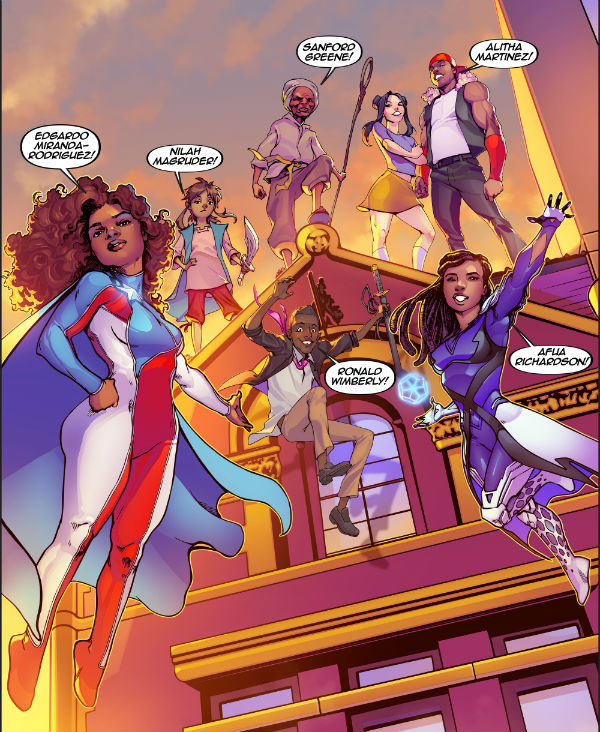 On Saturday November 16, 2019, a new and unprecedented exhibition The Color of Power: Heroes, Sheroes, & Their Creators brings to Harlem’s Caribbean Cultural Center African Diaspora Institute (CCCADI) a refreshing alternative universe brimming with stories and comic books that portray characters–and are created by artists–of the African Diaspora.

“We know our culture is rich with powerful people and strong resiliency that has characterized us for centuries. However, we often don’t see our culture and people represented in media. This exhibition will provide a window into the fantastical world of comics created by our own community, featuring our history and culture in a beautiful and prideful way and allowing our children to see themselves in Superheroes and Sheroes,” said Melody Capote, executive director of the Caribbean Cultural Center African Diaspora Institute (CCCADI), host of the exhibition.

The exhibit is guest-curated and features art from graphic novelist, activist, and philanthropist Edgardo Miranda-Rodriguez

rose to fame for giving Guardians of the Galaxy’s Groot character an Afro-Latino backstory. Since then, he gave life to cherished Afro-Puerto Rican Supershero character La Borinqueña. 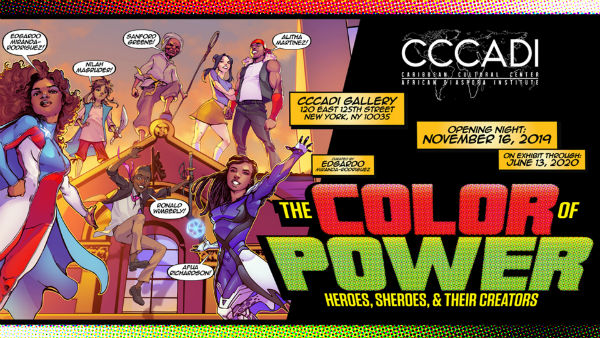 The Color of Power will display the independent, original work of critically-acclaimed graphic novelists, illustrators and comic book artists who have used their great commercial success to create and amplify the stories that celebrate the beauty and rich heritage of Afro-descendants, including:

Afua Richardson, best known for her work on the Eisner winning series Black Panther World of Wakanda, who will share Aquarius: The Book of Mer.

Sanford Greene has made a name for himself working with the likes of Marvel, DC

. The exhibit features his newest series Bitter Root, set during the Harlem Renaissance.

Alitha Martinez rose to prominence inking an array of characters from Marvel’s Iron Man, to NBC’s Heroes, and DC’s Batgirl. Color of Power showcases her self published series Yume & Ever which introduces a smart, gorgeous team of super teenagers of every race and gender.

Nilah Magruder, winner of the Dwayne McDuffie Award for Diversity, has written and storyboarded for DreamWorks

and Disney. She will share work from her M.F.K. series.

Ronald Wimberly earned an Eisner Award Nomination for his work on LAAB, an evocative throwback to underground presses. On exhibit will be work from Wimberly’s Black History in its Own Words and art from his original graphic novel Prince of Cats, an adaptation of Williams Shakespeare’s Romeo and Juliet.

And the late Billy Graham, the first Black artist to draw both Marvel Comics’ Luke Cage

. As a special treat, the exhibit will be displaying Billy Graham’s Black Panther and Luke Cage

art from the collection of Nicholas Katradis.

These artists, with roots in The Bahamas, Honduras, Jamaica, Puerto Rico, and the United States share special works of their powerful characters from their independently owned series. Through this reflective exhibition of stories and characters, audiences will be impacted by the many superpowers that have long sustained African Diaspora communities and cultures.

While Black and minority communities have recently gained increased representation in media and entertainment, a huge lack of diversity and portrayal of characters and stories that reflect the nuanced lives of people of color persists. What’s more, while many artists of color work behind the scenes to bring to life mainstream superheroes and sheroes, to create box office hits, they seldom reap the full rewards for their work.

“This exhibition reflects the work that we are doing that goes beyond the mainstream media industry and uplifts those stories and people we grew up with and that we know are as Superheroes as anybody else,” said artist and curator Miranda-Rodriguez. “Like the title, I want to show visitors to CCCADI that the color that gives power to popular culture looks like ours,” he added.

The exhibition will feature a series of events open to all families, community members, cosplayers, and geeks of color that will be led by exhibition artists and leaders from the comic industry. The opening day will include a fun programming including drop-in art, face painting, a photo booth, pop-up Black Comic and children’ bookshop. The exhibition opens in Harlem’s prestigious cultural institution the Caribbean Cultural Center African Diaspora Institute (CCCADI) located at 120 E 125th St, New York and runs until June 13, 2020.