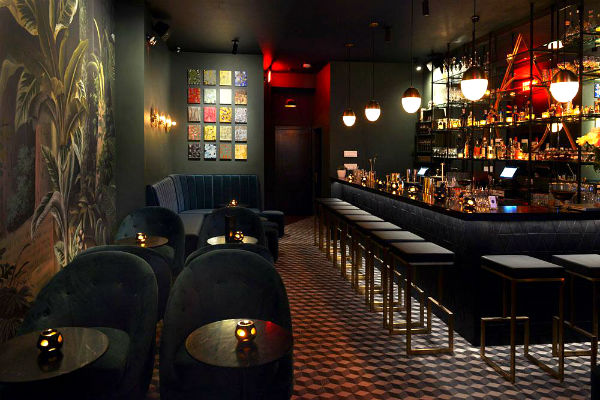 Sugar Monk is the creation of two artists who have merged their diverse artistic styles under one roof – Ektoras Binikos, an award-winning mixologist and visual artist, and Simon Jutras, a photographer and designer.

Sugar Monk pays homage to the uptown speakeasies that once flourished at the height of the Harlem Renaissance. Places where the creatives of the day, writers, musicians, poets, visual artists, social and political activists, as well as fashion and entertainment icons sought social interaction and cultural exchange after hours, over some delectable concoctions – far from the social constructs of race, ethnicity, and sexual identity.

Ektoras and Simon are reflecting upon that era, at a time when the community is experiencing a new resurgence, attracting today’s creatives, and preparing for the 100th anniversary of the Harlem Renaissance. Their goal is to fashion Sugar Monk into a modern classic, an intimate spot with a vibe that welcomes all patrons, and where the soft eclectic music sets the mood for engaging conversation. A place where those seeking an unforgettable and heightened sensory experience can indulge in a selection of the most complex and exquisite elixirs created by Ektoras Binikos, the epitome of a modern-day alchemist.

The Sugar Monk cocktail menu is in itself artful, an expression of Binikos’ journey through alchemy, art, and beauty. It features over 30 distinctive cocktails that blend exotic, unusual and mysterious ingredients. The menu is divided into 8 chapters, each referential to a special journey, from the monks and their long history of distillation to the jazz pioneer and musical master, Thelonious Monk.

Binikos is recognized among his peers as a master mixologist who believes mixology is “art in a glass”. He has perfected his craft at world-class establishments such as Aureole, Oceana and Michael’s New York, and most recently at the two Michelin star restaurant, Gabriel Kreuther. Binikos was also a managing partner and the creative force at the renowned downtown cocktail haven, 2nd Floor on Clinton. He is known for his support of charitable causes, and for fashioning memorable libations for a number of benefits such as Hurricane Katrina

, NYC AIDS, and The American Cancer Society. His cocktails have helped sponsor the Millay Colony of the Arts and The Spencertown Academy for the Arts in upstate New York, as well as the Steel Yard Art Colony in Rhode Island.

As with everything they do, Binikos and Jutras are paying close attention to every detail in preparation for the opening of Sugar Monk – from Simon Jutras’ thoughtful interior design to the etched crystal glassware and theatrical bar set up, where patrons become spectators to the magic created by the mixologists. At Sugar Monk, every staff member is an artist in his/her own right.

The fusion of art, mixology, and alchemy is the connective thread that runs through every aspect of this intimate venue. Everything at Sugar Monk is meant to indulge the senses and delight the palate. That is why at Sugar Monk, “Everything Matters”.