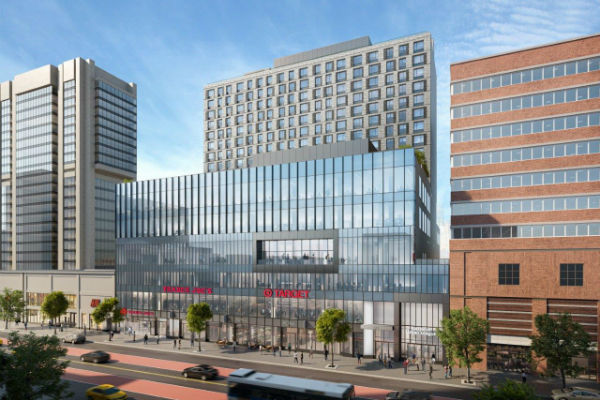 Dabar Development Partners is the Owner’s Representative for the National Urban League.

Trader Joe’s is a chain of neighborhood grocery stores, committed to providing customers outstanding value in the form of great quality products at great prices.

This will be the grocer’s 13th store in New York City and its first in Harlem, NY.

“This continues to be a dream project for our development team,” said S. Andrew Katz, Principal of The Prusik Group. “We are beyond thrilled to bring the National Urban League back to Harlem, open the first civil rights museum in the state, and now, one of most beloved grocery stores in the country alongside it. We’re looking forward to welcoming the community to what will be a cultural and commercial hub for Harlem in 2023.”

“Now, as always, Trader Joe’s appreciates being a part of a new opportunity, a source for nourishment, and a safe, welcoming environment for people to come together and shop.,” said Kenya Friend-Daniel, PR Director at Trader Joe’s. “We are excited to open our doors in this groundbreaking location, and we look forward to serving Harlem, a community rich in culture and diversity, as their neighborhood grocery store.”

Trader Joe’s will join Target as an anchor tenant at the building, adding significant retail activity to the 125th Street commercial corridor. In August, the development team. Target will occupy 44,000 square feet at the project.

Announced in August, the 17-story Urban League Empowerment Center will be a new hub for living, working and culture for the Harlem community and broader city In addition to the National Urban League’s headquarters, its centerpiece will be the state’s first civil rights museum, which will focus on the significant contributions of civil rights activists in the northern half of the United States.

At the same time, it will include at least 170 units of supportive and affordable housing for low-income New Yorkers making 30 percent to 80 percent of Area Median Income, as well as nearly 90,000 square feet of rentable retail space and roughly 70,000 square feet of Class A office space.

At the same time, it will include at least 170 units of supportive and affordable housing for low-income New Yorkers making 30 percent to 80 percent of Area Median Income, as well as nearly 90,000 square feet of rentable retail space and roughly 70,000 square feet of Class A office space.

The new building will also include below-market office space for several locally based non-profits, including the United Negro College Fund, 100 Black Men, Inc., and Jazzmobile.

The project, designed by Beyer Blinder Belle, is expected to be completed in 2023.

The Urban League Empowerment Center is located at 21 West 125th Street in Harlem between Adam Clayton Powell, Jr. Boulevard and Lenox Avenue, and is being developed in partnership with Empire State Development, New York State Homes and Community Renewal, and the Harlem Community Development Corporation.