30% Of The Black-Owned Businesses In NY Disappeared New York’s fast-gentrifying neighborhoods have contributed to an economic boom in the city over the last 15 years, with the number of new storefronts and companies increasing by 45%. But those economic gains have not been shared by all residents, according to a new report from the city comptroller’s office.

From 2007 to 2012, for example, the number of black-owned businesses in the city declined by more than 30%, even as black business ownership increased in other big cities around the country. Among the 25 largest US cities with over 500 black-owned businesses, New York is one of only three to see a decline, along with Detroit and Jacksonville.

“When black-owned businesses decline, I’m alarmed. When local residents are priced out of their neighborhoods, I’m frustrated. We have to do better,” NYC Comptroller Scott Stringer told BuzzFeed News. “We need to focus on real, community-level wealth creation. When we talk about gentrification, we can’t just focus on rising rents or increased cost of living – we also need to ensure that local residents gain access to new, local jobs.” 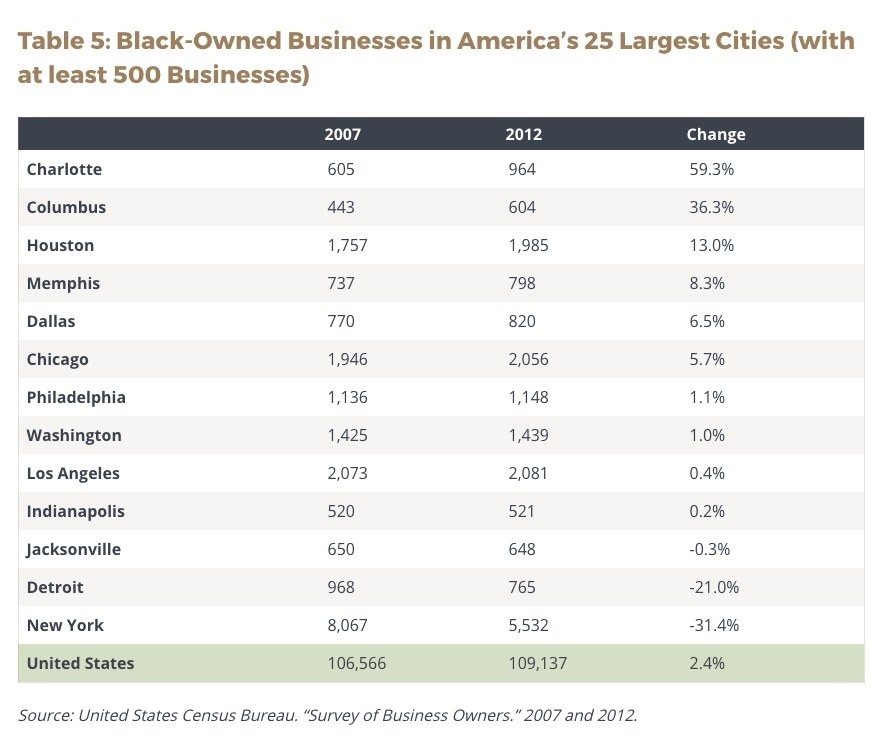 Reasons for the decline of black-owned businesses in New York include the black community’s becoming a smaller percentage of the overall city population, as well heavy exposure of black business owners to the retail sector, which was hit hard during the financial crisis and continues to face major stresses, according to the report’s authors.

While accounting for 22% of the city’s population, black New Yorkers now own only 3% of local businesses, and the numbers have worsened in the past five years, with the exception of healthcare and social-assistance industries.

Ownership has fallen in construction, accommodation and food services, and in professional, scientific, and technical services.

And even though New York City has seen an uptick in the overall number of minority-owned businesses, those businesses still account for a small share of total employment and revenue. Minorities own more than 33% of all city businesses that employ people, but employ just over 20% of the city’s workforce and account for just 16% of revenue, the report notes. 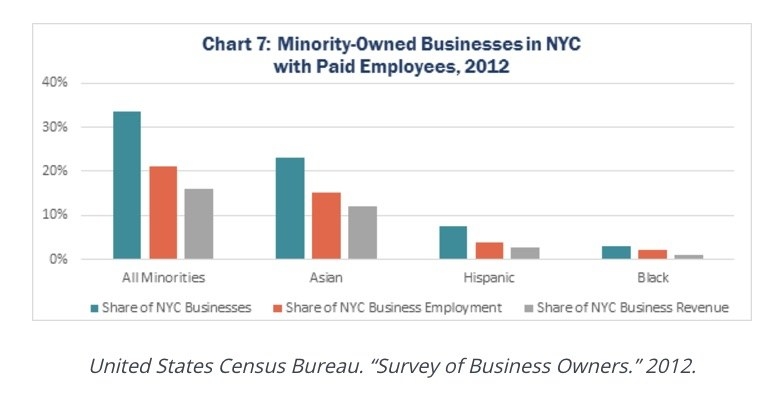 At the same time, the number of minority “non-employers”— freelancers or unincorporated home-based businesses — rose more than 30% across the city. The largest increases in business growth overall took place in Central Harlem (90%) and Crown Heights North/Prospect Heights (84%), two neighborhoods the office classified as “gentrifying.”

Prospect Lefferts, Greenpoint, and Williamsburg also saw business growth of more than 60% in those years.