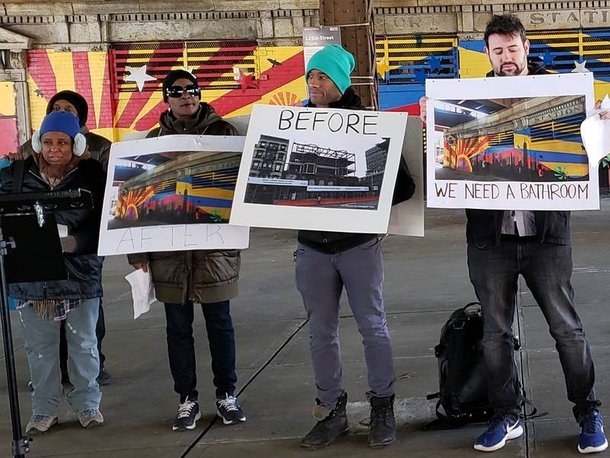 Advocates rallied Tuesday at the site of a now-defunct public restroom in East Harlem and called on the city to rehabilitate and reopen the facility.

More than 1,500 public urination summonses were issued within a two-block radius of the East 125th Street and Park Avenue restroom from 2013 to 2017, advocates from the group Picture the Homeless said to Patch.

The group, which organized the Tuesday rally with East Harlem Preservation, says that the city should install one of 15 Automated Public Toilets currently sitting at a storage facility in Queens at the East Harlem site while city officials determine how to renovate the shuttered restroom.

“I was born and raised in East Harlem, and this bathroom has been locked up since the ’70s” Charmel Lucas, a Picture the Homeless member currently residing in a city-funded shelter, said Tuesday. “I’ve talked to seniors, handicapped folks, cab drivers – there’s a whole lot of people out here who need to use the bathroom and have nowhere to go.”

Lucas added that the best way to reduce public urination violations in the area is to open a public restroom.

The site of the shuttered restroom is currently owned by the city Department of Transportation, advocates said at Tuesday’s rally. The DOT has told advocates that the building that housed the restroom has been deemed structurally unstable and recommended for demolition, but have not released the engineering report, a Picture the Homeless spokesperson said.