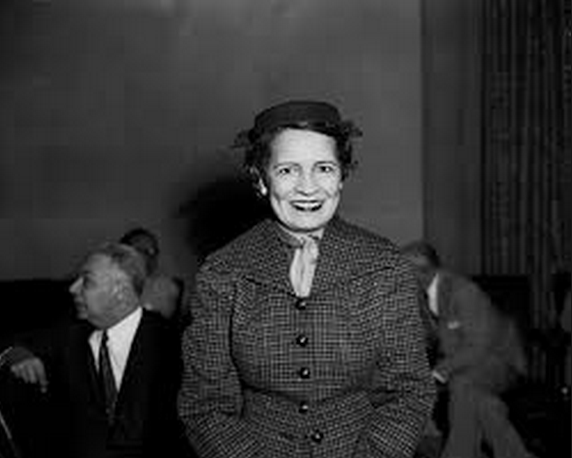 She was elected to the New York State Assembly in 1954.

Charles and Evelyn Allison moved to New York City from Petersburg, Virginia around the turn of the 20th Century. Bessie Allison was born on March 7, 1902. She grew up in New York City with her five sisters and one brother.

From a young age, Bessie had an interest in singing and dance.

She appeared in the original Shuffle Along in 1921, the first successful musical comedy with an all African American cast. She was in the 1925 edition of The Plantation Revue and in the integrated cast of Lucky in 1927.

She performed with the Show Boat road company and recorded for Black Swan Records. Bessie also danced in the chorus line of the famed Cotton Club.

Bessie Allison met Charlie Buchanan, who was the director of the Savory Club, while she was working as a dancer and singer in Harlem.

Bessie and Charlie were married in 1929 and she retired from the stage.

After her marriage, Bessie was active in Woman’s Civic Club activities in Harlem.

She frequented the popular night clubs. Jet magazine and other publication wrote about her social comings and goings.

It has been alleged that she had a lesbian relationship with Josephine Baker.

Buchanan was in Josephine Baker’s party at the Stork Club in 1951 when Baker was dissatisfied with her service and stormed out of the nightclub.

Baker made claims of racism and a public debate occurred in the media with high profile celebrities taking sides. Baker and Buchanan organized protests and a picket line to pressure the Stork Club’s clientele to not patronize the club.

Buchanan became interested in politics while she was campaigning for Governor Herbert A. Lehman’s election to the United States Senate in 1949.

After Lehman was elected she stayed involved with the community and political organizations in Harlem, and in 1954 she was approached about running as the Democratic Party candidate for the New York State Assembly from Harlem’s Twelfth District.

In the General Election, Buchanan won easily over her opponent Lucille Pickett, another black woman, 22,401 to 6,177 votes in a district heavily dominated by Democrats. Buchanan was reelected three more times and served a total of eight years.

Buchanan’s term in the State Assembly began in January 1955. While in the legislator she served on the Cities, Institutions, Printing, and Social Welfare Committees.

She was assigned to the Joint Legislative Committee on the Problems of the Aging. In 1960 Buchanan was selected by Governor Nelson Rockefeller to be a Delegate to the White House Conference on the Aged.

In 1962, Buchanan did not run for reelection. Instead she crossed party lines and supported Republicans Governor Rockefeller and Senator Jacob Javits in their reelection bids.

In 1962, Rockefeller appointed Buchanan to be State Commissioner of the Human Rights Division, a position she held for five years.

Buchanan remained active in community activities after she left public office. She died in 1980 at the age of 78 after a short illness.