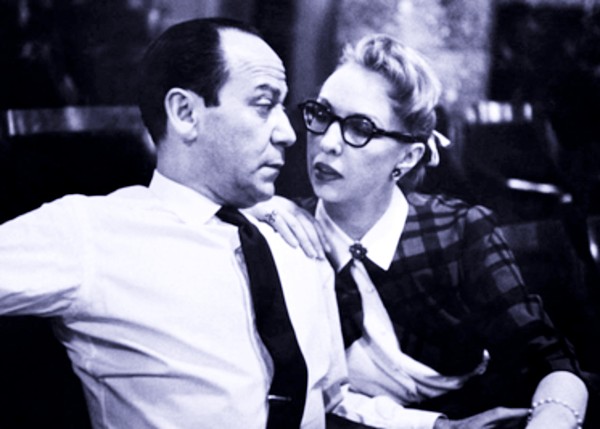 He wrote the music and lyrics for the Broadway musicals Guys and Dolls, How to Succeed in Business Without Really Trying, and others.

He won separate Tony Awards for the music and lyrics in both shows as well as shared the Pulitzer Prize for Drama for the latter.

He also wrote songs for over 60 Hollywood films and for Tin Pan Alley, many of which have become standards, and was nominated for five Academy Awards for best song, winning once for “Baby, It’s Cold Outside“.

He also wrote songs for over 60 Hollywood films and for Tin Pan Alley, many of which have become standards, and was nominated for five Academy Awards for best song, winning once for “Baby, It’s Cold Outside“.

Loesser was born to a Jewish family in New York to Henry Loesser, a pianist, and Julia Ehrlich. He grew up in a house on 14 West 107th Street in Harlem, New York.

His father had moved to America to avoid Prussian military service and work in his family’s banking business. He married Bertha Ehrlich; their son, Arthur Loesser, was born on August 26, 1894.

Bertha’s younger sister Julia arrived in America in 1898, marrying Henry in 1907 after Bertha died in childbirth. Grace, their first child, was born in December of that year. Their son Frank was born on June 29, 1910.

Loesser’s parents, secular German Jews, prized high intellect and culture and educated him musically in the vein of European composers.

But although Henry was a full-time piano teacher, he never taught his son. In a 1914 letter to Arthur, Henry wrote that the four-year-old Frank could play by ear “any tune he’s heard and can spend an enormous amount of time at the piano.” (Frank Loesser later collaborated with musical secretaries to ensure that his written scores reflected the music as he conceived it.)

Loesser disliked his father’s refined taste in music and resisted by writing his own music and taking up the harmonica. He was expelled from Townsend Harris High School, and from there went to City College of New York in Harlem.

He was expelled from Harlem‘s CCNY in 1925 after one year for failing every subject except English and gym.

He was expelled from Harlem‘s CCNY in 1925 after one year for failing every subject except English and gym.

After his father died suddenly on July 20, 1926, Loesser was forced to seek work to support his family.

Early career as a lyricist

Loesser’s first song credit was “In Love with the Memory of You”, with music by William Schuman, published in 1931.

Other early lyrical credits included two hit songs of 1934, “Junk Man” and “I Wish I Were Twins”, both with music by Joe Meyer and the latter with co-lyric credit to Eddie DeLange. “Junk Man” was first recorded that year by Benny Goodman with singer Mildred Bailey on vocals.

In the mid-1930s, he performed at The Back Drop, a night spot on east 52nd Street, along with composer Irving Actman, while by day working on the staff of Leo Feist Inc. writing lyrics to Joseph Brandfon’s music at $100 per week. After a year, Feist had not published any of them.

Loesser fared only slightly better collaborating with the future classical composer Schuman, selling their 1931 song to Feist that would flop.

Loesser described his early days of learning the craft as having “a rendezvous with failure.” While he dabbled in other trades, he inevitably returned to the music business.

Loesser’s work at the Back Drop led to his first Broadway musical, The Illustrator’s Show, a 1936 revue written with Back Drop collaborator Irving Actman, which lasted only four nights.

The year before while performing at the Back Drop, Loesser met an aspiring singer, Lynn Garland (born Mary Alice Blankenbaker).

He proposed in a September 1936 letter that included funds for a railroad ticket to Los Angeles where Loesser’s contract to Universal Pictures had just ended. The couple married in a judge’s office.

Loesser was offered a contract by Paramount Pictures. His first song credit there was “Moon of Manakoora”, written with Alfred Newman for Dorothy Lamour in the film The Hurricane.

He wrote the lyrics for many popular songs during this period, including “Two Sleepy People” and “Heart and Soul” with Hoagy Carmichael and “I Hear Music” with Burton Lane. He also collaborated with composers Arthur Schwartz and Joseph J. Lilley.

One of his notable efforts was “See What the Boys in the Back Room Will Have”, with music by Friedrich Hollaender and sung by Marlene Dietrich in Destry Rides Again.

In 1941, Loesser wrote “I Don’t Want to Walk Without You” with Jule Styne, included in the 1942 film Sweater Girl and sung by Betty Jane Rhodes.

Irving Berlin was a huge fan of the song and once played it repeatedly, telling Loesser why he believed it was the greatest song he wished he’d written.

Members of the Western Writers of America chose the 1942 song “Jingle Jangle Jingle”, for which Loesser wrote the lyrics, as one of the Top 100 Western songs of all time.

He stayed in Hollywood until World War II, when he joined the Army Air Force.

During World War II, he enlisted into the United States Army Air Forces and continued to write lyrics for films and single songs.

Related:  Blanche Dunn The Fabulous “It” Girl Of Harlem 1940 (Photography)

Loesser wrote other songs at the request of the armed forces, including “What Do You Do in the Infantry?” and “The Ballad of Rodger Young” (1943). He also wrote “They’re Either Too Young or Too Old” for the 1943 film Thank Your Lucky Stars.

In 1944, Loesser worked as the lyricist on the little-known musical,Hi Yank!, performed by and for U.S. soldiers abroad, with music by Alex North. Hi Yank! was produced by the U.S. Army Office of Special Services as a “blueprint special” to boost the morale of soldiers located where USO shows could not visit.

The “blueprint” was a book containing a musical script with instructions for staging the show using materials locally available to deployed soldiers. According to a document at the U.S. Army Centre for Military History, a touring company formed in Italy was slated to produce the musical.

Hi Yank! was generally forgotten until 2008 when the PBS History Detectives researched the case of a long-saved radio transcription disc.

The disc has two songs and a promotional announcement for the show’s Fort Dix premiere in August 1944, when the disc was broadcast there.

In 1948, Broadway producers Cy Feuer and Ernest H. Martin asked Loesser to write music and lyrics to George Abbott’s book for an adaptation of the Brandon Thomas play Charley’s Aunt.

Also in 1948, Loesser sold to MGM the rights to “Baby, It’s Cold Outside”, a song he wrote in 1944 and performed informally at parties with his then-wife Lynn.

The studio included it in the 1949 movie Neptune’s Daughter, and the song became a huge hit. While Garland was mad at Loesser for selling what she considered “their song”, it won the Academy Award for Best Original Song.

His next musical, Guys and Dolls (1950), based on the stories of Damon Runyon, was again produced by Feuer and Martin. Guys and Dolls became a hit and earned Loesser a Tony Award.

In 1950, Loesser started Frank Music Corporation. Initially created as a means of controlling and publishing his work, the company eventually supported other writers, including Richard Adler, Jerry Ross, and Meredith Willson.

In 1951, he was on the Faye Emerson Show, as Loesser sings fragments of of “Slow Boat to China” and “Spring Will Be a Little Late This Year”:

In 1952, Loesser wrote the score for the film Hans Christian Andersen. The movie’s songs included “Wonderful Copenhagen”, “Anywhere I Wander”, “Thumbelina”, and “Inchworm”.

Around the beginning of 1957, Garland and Loesser divorced, and Loesser began a relationship with Jo Sullivan, who had played the character of Rosabella in Fella.

He wrote the music and lyrics for How to Succeed in Business Without Really Trying (1961), which ran for 1,417 performances, won the 1962 Pulitzer Prize for Drama, and received another Tony and a Grammy Award for Best Musical Theater Album.

Pleasures and Palaces (1965), the last Loesser musical produced during his lifetime, closed during out-of-town tryouts.

At the time of his death, Loesser was composing the book, music and lyrics for Señor Discretion Himself, a musical version of a Budd Schulberg short story.

When he was asked why he did not write more shows, Loesser responded that “I don’t write slowly. It’s just that I throw out fast.” The New York Times confirmed his hard-working habits and wrote that Loesser “was consumed by nervous energy and as a result slept only four hours a night, spending the rest of the time working.”

Lynn Garland and Frank Loesser divorced around the beginning of 1957 after 21 years of marriage.

They had two children together: John Loesser, who works in theatre administration, and Susan Loesser, an author who wrote her father’s biography A Most Remarkable Fella: Frank Loesser and the Guys and Dolls in His Life: A Portrait by His Daughter, 1993, 2000.

He married his second wife Jo Sullivan (born Elizabeth Josephine Sullivan) on April 29, 1959, after being introduced to her by Lynn. Jo Sullivan had played a lead in The Most Happy Fella.

They had two children. Emily is a performer who is married to actor Don Stephenson. Hannah was an artist in oils, pastels, and mixed media; she died of cancer on January 25, 2007. Jo died on April 28, 2019, at age 91.