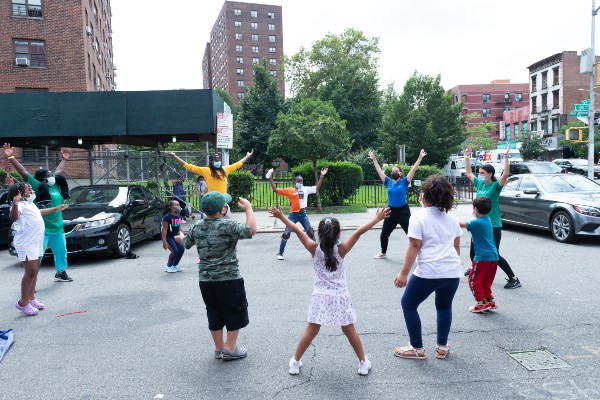 Throughout the Summer of 2021, American Ballet Theatre (ABT) held workshops at Fresh Air Summer Spaces in Sunset Park, Brooklyn; Jackson Heights, Queens; Harlem; Soundview and Mott Haven in the Bronx.

Fresh Air children experienced the joy of dance on the streets of New York City. ABT teaching artists shared their art and enthusiasm for dance and inspired students in creative expression.

Workshops began with stretches and children went on to learn about the five basic positions in ballet with a focus on balance, arms, and feet positioning. In ABT workshops throughout the city young people were engaged in movement outdoors in their own communities. All activities followed health and safety guidelines.

Launched last summer in response to the pandemic, Fresh Air Summer Spaces would not be possible without the support of partners such as ABT and the local community.

The Fresh Air Fund, an independent, not-for-profit organization has provided free summer experiences in the outdoors to more than 1.8 million New York City children from low-income communities since 1877.

Related:  Report: Blacks Are Twice As likely To Have Diabetes

American Ballet Theatre is one of the greatest dance companies in the world. Revered as a national treasure since its founding season in 1940, its mission is to create, present, and extend the great repertoire of classical dancing for the widest possible audience.

Headquartered in New York City, ABT is the only cultural institution of its size and stature to extensively tour, engaging and inspiring audiences for eight decades in 50 US states, 45 countries, and over 480 cities worldwide. ABT’s extraordinary dancers hail from 14 countries and 24 US states.

ABT’s repertoire includes full-length classics from the nineteenth century, the finest works from the early twentieth century, and diverse and dynamic contemporary work by the leading choreographers of today. In 2006, by an act of Congress, ABT became America’s National Ballet Company®.