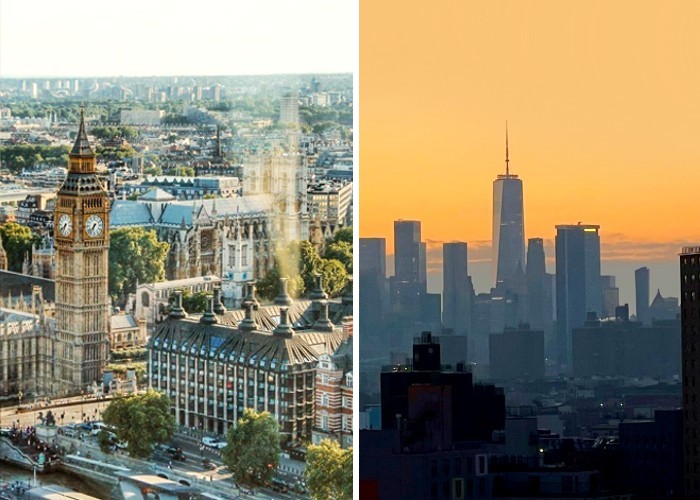 C40 Cities is thrilled to announce a new partnership with American Express to support the development of consumption-based emissions inventories for London and New York City.

The collaboration was discussed today at a meeting between C40 Chair and Mayor of London Sadiq Khan and Mayor of New York City Mayor Eric Adams.

Adams also announced that New York City will sign on to the C40 Good Food Cities Declaration to increase access to balanced and nutritious food to city residents and halve food waste, joining London and 13 other cities around the world which are delivering on the same pledge.

The consumption-based emissions inventories will enable London and New York City to develop a suite of actions to incentivize more sustainable consumption in collaboration with people and businesses. The project will also pioneer new ways for other cities to measure emissions from urban consumption.

The Intergovernmental Panel on Climate Change has made clear that time has almost run out to limit global heating to around 1.5°C.

To achieve the Paris Agreement of limiting global heating to 1.5°C, there is an urgent need to reduce the emissions impact of urban consumption, especially what is eaten and the waste in food systems, and to create more circular economies that do not depend on harmful over-consumption of goods and services.

Many cities already promote sustainable living, engaging businesses and communities, but lack the data to estimate and measure the impact of local policy aimed at reducing a city’s carbon footprint.

Building data inventories in partnership with city businesses (such as supermarket chains and retailers) is important for cities to measure, plan and act to ensure our cities become better places to live for all people and sustainable businesses can thrive.

London and New York City are committed to understanding the impact of their cities’ consumption by measuring their consumption emissions and taking action to address the emissions and climate impacts beyond the direct control of the city government.

Sadiq Khan, Mayor of London and C40 Chair, says, “In London, we are not only reducing direct emissions from buildings and cars, but looking at ways to reduce the emissions from imports, from food to fashion, energy to electronics and other products Londoners consume.

New York City Mayor Eric Adams says, “Too often we ignore the role that food plays in the destruction of our environment. You can’t fix what you don’t measure, which is why mapping the data on how food, construction materials, and consumer goods contribute to our environmental impact is critical to effectively addressing climate change. We also can’t afford to wait, which is why I’m proud to sign the C40 Good Food Cities Declaration today to aggressively reduce food waste, focus on nutritious plant-forward food, and reduce New York City’s carbon emissions.”

Michael R. Bloomberg, UN Special Envoy for Climate Ambition and Solutions, President of the C40 Board, and 108th Mayor of New York City, says, “If you can’t measure it, you can’t manage it. Our Administration took the first comprehensive inventory of New York’s carbon emissions, which allowed us to target our climate efforts and track our progress – and allowed the public to hold us accountable for delivering results. This new effort being led by London and New York, two engines of the global economy, can help cities around the world to devise smart policies and empower the public to make informed choices.”

Stephen J. Squeri, Chairman and CEO of American Express, says, “Scaling climate action globally requires collaboration across the private, public, and non-profit sectors. Partnering with C40 Cities to develop a consumption-based emissions inventory for NYC and London is another important step in our commitment to advance climate solutions and will help empower cities and communities to leverage data and insights to effect positive change.”

Mark Watts, Executive Director of C40 Cities, says, “In our globalized and warming world, cities hold a unique role and responsibility to reduce urban emissions while ensuring that all people and nature can thrive. Building the evidence base is the natural starting point for mayors to plan actions to reduce their city’s consumption footprint, as well as their direct emissions. NYC and London‘s commitment to develop a consumption-based emission inventory, including food, is far more than a data analysis exercise. It is the basis to create better health, well-being and jobs locally, and work towards a fairer society that doesn’t exploit people or nature. Keeping urban consumption – particularly in the Global North – within planetary boundaries.”