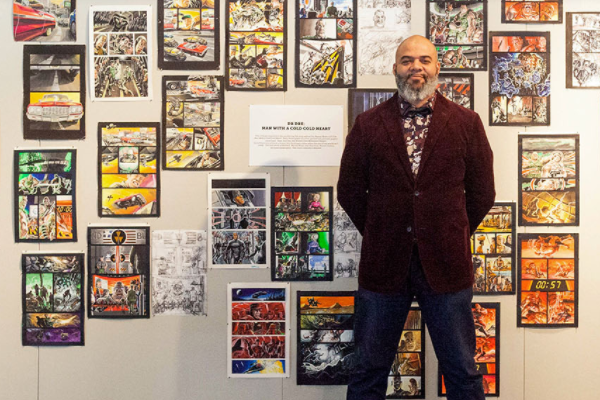 Afrofuturist-themed artwork in the area of graphic novels and concept designs will range from Fielder’s work with The Village Voice and Marvel Comics to his projects Matty’s Rocket and the groundbreaking HarperCollins-Amistad graphic novel epic, ‘INFINITUM: An Afrofuturist Tale’.

“Tim has been a part of The Carnival’s family for many years and has made a huge contribution to the development of so many of our students that have followed in his footsteps,” said Michael Unthank, Interim Chair, The Children’s Art Carnival. “We are so excited to welcome Tim back to CAC for this exciting exhibition.”

“The wave is cresting in this new age of Afrofuturism,” said Tim Fielder. “Black Metropolis represents my life’s work and I’m so proud to be partnered with The Children’s Art Carnival to bring my work to the world.”

Tim Fielder is an Illustrator, concept designer, cartoonist, and animator born in Tupelo, Mississippi, and raised in Clarksdale, Mississippi.

He has a lifelong love of Visual Afrofuturism, Pulp entertainment, and action films. He holds other Afrofuturists such as Samuel R Delany, Octavia Butler, Pedro Bell, and Overton Lloyd as major influences.

He is known for the graphic novel, INFINITUM: An Afrofuturist Tale, published by HarperCollins Amistad in 2021.  Additionally, he produced the Glyph Award-winning ‘Matty’s Rocket’.