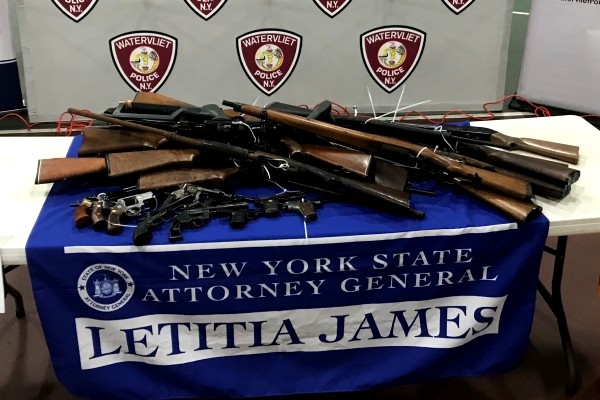 New York Attorney General Letitia James announced that 49 firearms from Harlem to the Hudson were turned in to law enforcement at a gun buyback event.

The event was held in Albany County hosted by her office in partnership with the Watervliet, Cohoes, Colonie, Green Island, and Menands police departments.The Office of the Attorney General (OAG) accepts — with no questions asked — working and non-working, unloaded firearms in exchange for compensation on site. To date, Attorney General James has taken more than 2,500 firearms out of communities through gun buyback events and other efforts since taking office in 2019.

“Gun violence has long terrorized our communities and endangered the welfare of New Yorkers,” said Attorney General James. “Whether it’s hosting gun buyback events or through other measures, we are taking a multipronged approach and doing everything we can to combat this crisis and keep our streets safe. My office has successfully taken more than 2,500 dangerous firearms out of circulation, and we remain committed to continuing our efforts to protect New Yorkers from harm. I thank our partners in law enforcement for their vital support and collaboration in ensuring public safety.”

“Gun violence is not a single solution problem,” said Watervliet Police Chief Joseph Centanni. “I am hopeful that these events will assist in the larger effort to protect exposed populations such as children, those confronted with mental health issues, and domestic violence victims.”

Today’s community gun buyback resulted in the collection of 49 guns, including 13 handguns, 22 shotguns and rifles, and 14 non-working guns. Since 2013, OAG has hosted gun buyback events throughout New York state and has successfully collected more than 4,500 firearms.

Today’s community gun buyback resulted in the collection of 49 guns, including 13 handguns, 22 shotguns and rifles, and 14 non-working guns. Since 2013, OAG has hosted gun buyback events throughout New York state and has successfully collected more than 4,500 firearms.

“Instances of gun violence are on the rise across the country. Innocent people become victims for nothing more than being in the wrong place at the wrong time,” said Watervliet Mayor Charles Patricelli. “In the past few months, our police department has made several gun arrests which has reduced the number of firearms in our community. We commend our police officers and all our neighboring agencies for their outstanding work, but they cannot do it alone. I am thankful that the Office of the Attorney General, along with our neighboring agencies, agreed to provide support. All of us working together can make a difference.” 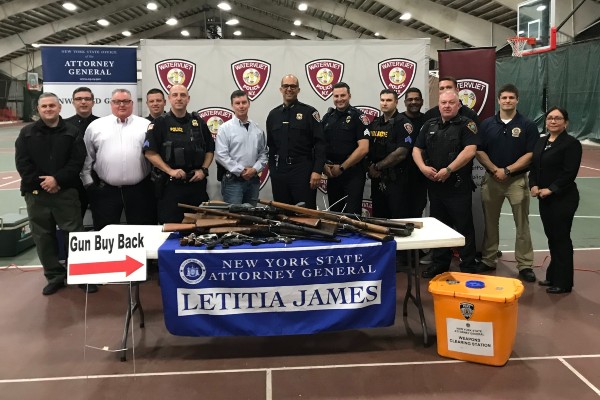 Gun violence is a public health crisis that is plaguing communities throughout New York, and this event is the latest action that Attorney General James has taken to combat this crisis and protect New Yorkers from harm.

To date, Attorney General James has taken a total of more than 2,500 guns out of communities since 2019.