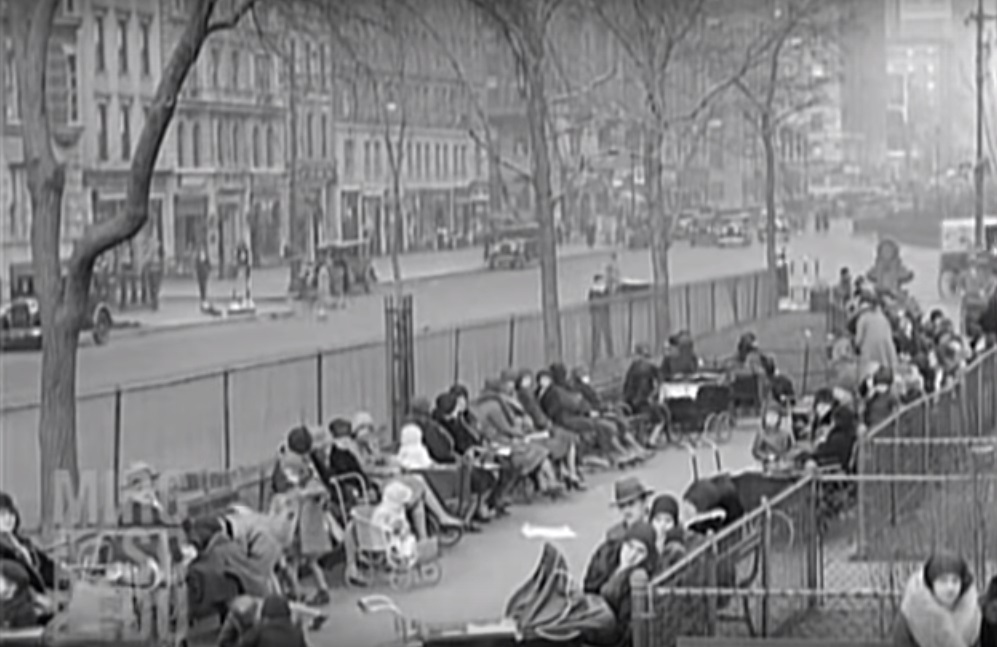 The video was taken at Straus Park is a small landscaped park on the Upper West Side of Harlem where we found this old sound film of a public park at West 106th Street, in West Harlem, NY on January 9, 1930.

” and “Here We Go Round the Mulberry Bush

“. This was taken with an early Movietone sound camera. Worked on footage and sound.

Straus Park is a great park with a unique history, the most notable feature the park is a bronze 1913 statue by American artist Augustus Lukeman of a nymph gazing over a calm expanse of water in memory of Ida and Isidor Straus, husband and wife, he a United States congressman and co-owner of Macy’s, who died together on RMS Titanic.

The model for the statue was Audrey Munson. On the memorial is carved a passage from Second Samuel 1:23, “Lovely and pleasant were they in their lives and in their death they were not parted.” The passage refers to Ida’s choice to stay with her beloved husband, Isidor, rather than get safely into a lifeboat.

The Strauss lived in a house at 2747 Broadway, between 105th and 106th Streets, one block south of the location of the memorial.

The park exists on a small triangle of land at the intersection of Broadway and West End Avenue. It was known as Schuyler Square when acquired by the city in 1895 and was renamed Bloomingdale Square in 1907. Between 1995 and 1997, Straus Park was renovated and expanded to the west, by the addition of 15 feet of West End Avenue. An endowment established by the Straus family funded the transformation of a neglected reflecting pool in front of the sculpture into a planting bed. The Friends of Straus Park fund maintenance and the planting of seasonal flowers.

, and Straus Park is the title of a novel by Belgian author Paul Baeten Gronda, published in 2013.

The video is great because it gives us an insight into Harlemites just a few years after the great depression.