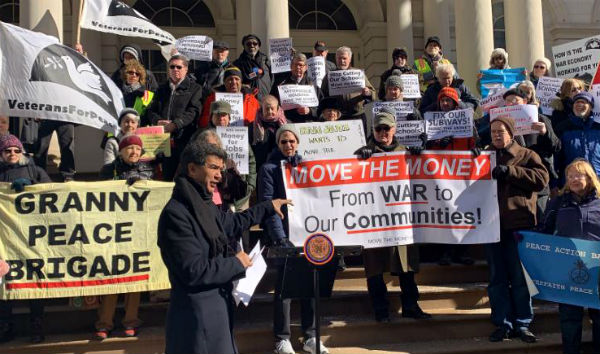 This morning outside New York City Hall Council Member Ydanis Rodriguez was joined by the Move the Money Coalition.

The coalition is comprised of Veterans for Peace Chapter 34-NYC, Brooklyn for Peace, U.S. Labor Against the War – NYC Chapter, Domestic Workers United, Queens Peace Council, New York State Peace Action, NY State Nurses Association, CODEPINK, and members of Judson Memorial Church, plus more, for a rally urging Members of Congress and the federal government to move significant funds from the military budget to human needs and services. Municipalities rely on federal grants and discretionary funds to operate a multitude of City programs from our public schools to healthcare services to public housing to investments in infrastructure. Council Member Rodriguez recently introduced Resolution 747, to call on Members of Congress and the federal government to reduce the amount of federal funding allocated to defense spending and focuses on how the federal defense budget restricts local spending on essential social and public services in the City of New York.

The Trump Administration intends to increase the amount of military spending to 65% by 2023, which will hurt cities across the United States that rely on federal dollars to supplement social service programs provided to residents. The consequences of continuing to enlarge the military budget will only further economic and social inequality in the United States, and especially in New York City. The rally today highlighted the injustice of expanding the budget of the military and the Move the Money Coalition is committed to holding every Member of Congress accountable.

“Thank you to the Move the Money Coalition for supporting Council Resolution 747 and for continuing to fight for social justice. We are investing trillions of dollars on our military, but our cities do not have the resources they need. I call on Mayor de Blasio to have conversations with other mayors around the nation, and seriously discuss the need to reduce military spending and prioritize people,” said Council Member Ydanis Rodriguez.

“Working people in New York City receive and provide vital public services in housing, transportation, and education. We suffer in both roles from the deep cuts in federal funding that have starved New York City’s budget. We join today with Council Member Rodriguez and our many allies in the battle to restore those funds from cuts in the bloated military budget. We ask the entire City Council to join in this effort to Move the Money!” said Michael Zweig. President, U.S. Labor Against the War – NYC Chapter.

“Our subways are failing, our schools are crumbling and New Yorkers can’t afford housing yet Congress votes each year to spend 60 percent of the Federal budget on the military and the Pentagon! It’s way past time for them to move the money from war to our communities. The City Council must pass Resolution 747,” said Dr. Charlotte Phillips, Chair, Brooklyn For Peace.

“We in Veterans For Peace who have participated in wars, death and destruction call on our government to ‘move the money’ to educate our people; care for the ill and those in need; and provide decent housing for all. It is time! Veterans’ care is being put at risk, while the Pentagon grabs the lion’s share of the annual discretionary budget,” said Susan Schnall, President, Veterans For Peace Chapter 34/ NYC.

“About the only thing more important than shifting money in the military budget to domestic use would be ending the use of that money to fund the Pentagon’s ongoing war-making around the world,” said Allen Hunter, Judson Memorial Church.