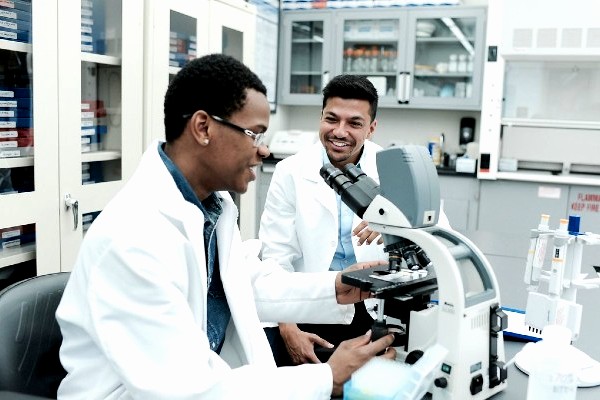 Touro College of Osteopathic Medicine’s “MedAchieve Scholars” program has been awarded the 2021 “Inspiring Programs in STEM Award” from INSIGHT Into Diversity Magazine, for the third consecutive year.

INSIGHT is the largest and oldest publication reporting on diversity and inclusion in higher education.

Its STEM award celebrates colleges and universities that inspire and encourage students from underrepresented groups to pursue careers in science, technology, engineering, and mathematics (STEM).

“We are honored to accept this award, which recognizes TouroCOM’s commitment, embodied in its mission, to increasing the ranks of underrepresented minorities in medicine and to serving the underserved,”

“We are honored to accept this award, which recognizes TouroCOM’s commitment, embodied in its mission, to increasing the ranks of underrepresented minorities in medicine and to serving the underserved,” said Nadege Dady, Ed.D., dean of student affairs at TouroCOM Harlem. “The COVID-19 pandemic, which has taken the lives of millions, has demonstrated in shocking detail the crucial need to reduce health and healthcare disparities. This can be accomplished only by bringing more diversity into medical education and into the physician workforce.”

Most of the students attend public schools in Harlem, come from low-income households, and will be the first in their families to attend college.

Most of the students attend public schools in Harlem, come from low-income households, and will be the first in their families to attend college.

They meet throughout the academic year for two hours of lectures, labs, and other activities and are mentored one-on-one by TouroCOM medical students, who design the curriculum and teach the foundations of medicine and how the body responds to stress, injury, and disease.

TouroCOM officially launched MedAchieve in 2012, after revitalizing an elective course for Harlem high school students located in the community. To date, 142 students have graduated from the two-year MedAchieve curriculum.

“MedAchieve is what really opened my eyes,” says Jordan McDonald, 22, who attended in 2016 while a student at A. Philip Randolph High School in Harlem.

“MedAchieve is what really opened my eyes,” says Jordan McDonald, 22, who attended in 2016 while a student at A. Philip Randolph High School in Harlem. A resident of Prospect Park, Brooklyn, whose family hails from Jamaica, McDonald was inspired to pursue medicine by his family doctor and by his mother, who works as a nurse in a nursing home. MedAchieve, McDonald said, helped him learn more about medicine and focus on neurosurgery as a career path, as well as excel in his science classes.

In May, McDonald graduated with a B.S. in Biology from St. Bonaventure University in southwestern N.Y. This month he begins his studies for a M.S. in Cancer Sciences at Roswell Park Comprehensive Cancer Center in Buffalo, N.Y. and the University of Buffalo. He still plans on neurosurgery, a dream nurtured by his TouroCOM mentor while at MedAchieve.

McDonald’s mentor was Kowshik Sen, DO, who recently completed a three-year residency in internal medicine at New York Medical College and is relocating to Florida to work as a hospitalist. The two have stayed in touch since TouroCOM, with McDonald reaching out when he felt in need of support.

Sen believes McDonald’s will reach his goal. “He was always confident and very determined. I aimed to be an older influence, like an older brother. The mentorship was about helping Jordan explore his own innate interest in science,” says Sen.

Sen noted the shortage of African-Americans and Hispanics in medicine and that MedAchieve aims to fill the gap. “A lot of students in urban communities don’t realize the educational opportunities available, and not many understand the reason why – or where – they can take their education after college, which isn’t simply a means to a job. It can be a vital stepping stone to achieving one’s dreams.”

“We know that many STEM programs are not always recognized for their success, dedication, and mentorship for underrepresented students,” says Lenore Pearlstein, owner, and publisher of INSIGHT Into Diversity magazine. “We want to honor the schools and organizations that have created programs that inspire and encourage young people who may currently be in or are interested in a future career in STEM. We are proud to honor these programs as role models to other institutions of higher education and beyond.”