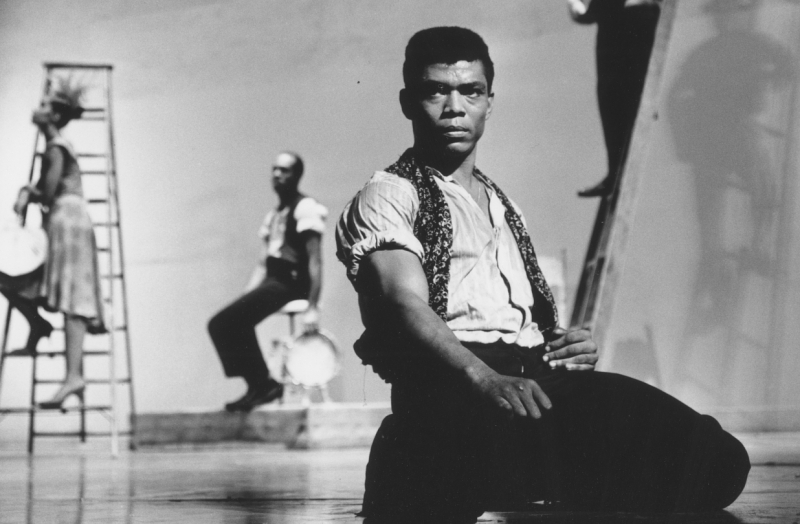 Heralded as a must-see at the Sundance Film Festival and a Tribeca Film Festival critics pick, the film is told through Ailey’s own words, along with interviews with those close to him, and features evocative archival footage and rarely seen historic performances.

The official trailer here previews the film acclaimed as “extraordinarily moving” and “a movie that pulses with joyful expressiveness” that “hauntingly evokes Alvin Ailey’s majesty.”

An artist who found salvation through dance, Alvin Ailey faced a world that refused to welcome him and resolved to build one that would. His determination, activism and search for truth in movement resulted in pioneering choreography centered on the African American experience that reached around the world opening hearts, minds and doors for others.

Each year, Alvin Ailey American Dance Theater’s performances continue to inspire, enlighten and unite all with a universal celebration of the human spirit through the African-American heritage and the modern dance tradition.

Performing in the BAAND Together Dance Festival from August 17-21 in Damrosch Park as part of Lincoln Center Restart Stages, the Company is joining with New York City’s most acclaimed dance companies to champion the city’s cultural and economic revival before launching a new season at New York City Center December 1-19, 2021.

His legacy also lives on through the programs of the entire organization, like The Ailey School, the official school of Alvin Ailey American Dance Theater training the next generation of performing artists; and Ailey Extension, currently offering virtual dance and fitness classes for all levels around the world.

Many know the name Alvin Ailey, but how many know the man? Through this feature-length portrait, viewers are invited to explore the life and work of a brilliant and enigmatic genius who received this nation’s highest honors. The New York Times raved that “Like Ailey’s dances, the documentary leaves you swimming in sensation.”

For updates on the scheduled screenings at theaters nationwide, visit: ailey-themovie.com

A moving portrait of dance visionary Alvin Ailey opens in movie theaters nationwide on Friday, August 6, following premieres at the Sundance and Tribeca Film Festivals. Spotlighted as one of this summer’s must-see documentaries by USA Today, AILEY is a dynamic look at a trailblazing pioneer in American culture whose legacy continues to inspire. Directed by Jamila Wignot, the acclaimed film takes viewers on a journey through the life of Alvin Ailey using his own words, interviews with those close to him, and rarely seen historic performances and archival footage. A powerful and personal look at an artistic genius who received this nation’s highest honors, The New York Times raved that “Like Ailey’s dances, the documentary leaves you swimming in sensation.” Use the AILEY trailer to highlight in broadcast segments.

Alvin Ailey American Dance Theater, recognized by U.S. Congressional resolution as a vital American “Cultural Ambassador to the World,” grew from a now‐fabled March 1958 performance in New York that changed forever the perception of American dance. Founded by Alvin Ailey, recent posthumous recipient of the Presidential Medal of Freedom – the nation’s highest civilian honor, and guided by Judith Jamison beginning in 1989, the Company is now led by Robert Battle, whom Judith Jamison chose to succeed her on July 1, 2011.

Alvin Ailey American Dance Theater has performed for an estimated 25 million people in 71 countries on 6 continents – as well as millions more through television broadcasts, film screenings, and online platforms – promoting the uniqueness of the African‐American cultural experience and the preservation and enrichment of the American modern dance tradition.

The Ailey organization also includes Ailey II (1974), a second performing company of emerging young dancers and innovative choreographers; The Ailey School (1969), one of the most extensive dance training programs in the world; Ailey Arts in Education & Community Programs, which brings dance into the classrooms, communities and lives of people of all ages; and The Ailey Extension (2005), a program offering dance and fitness classes to the general public, which began with the opening of Ailey’s permanent home—the largest building dedicated to dance in New York City, the dance capital of the world —named The Joan Weill Center for Dance, at 55th Street at 9th Avenue in New York City. For more information, visit www.alvinailey.org.