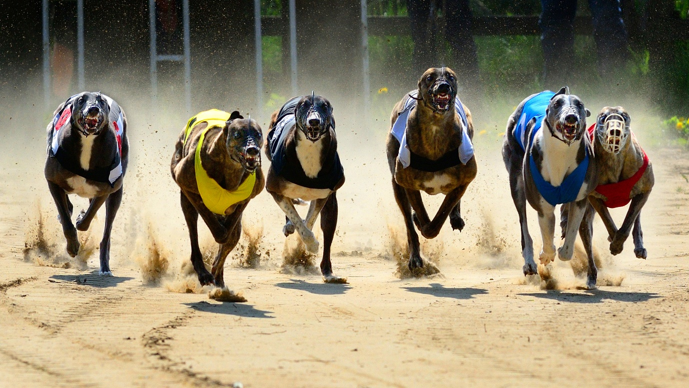 The Greyhound Derby is the cream of the crop when it comes to races in the sport.

Since it was first run at the historic White City Stadium back in 1927, until this very day, owners and trainers make it their goal to get their hands on the iconic silver cup. After spells at Wimbledon and Towcester, the prestigious race has been hosted at the Nottingham Greyhound Stadium since 2019, with Deerjet Sydney, who was heavily favoured in the bet exchange, scooping the rescheduled final on Halloween (October 31st), after it was moved from its original date in May, due to the coronavirus pandemic.

In almost 90 runnings of the historic race, just four dogs have won the race more than once, with all four also winning it back-to-back! So, let’s take a trip down memory lane, and look back at how these four dogs will go down in history.

It didn’t take long for the first dog to have his name engraved in the history books as the first back-to-back winner. After Entry Badge and Boher Ash’s victories in the first two races, Mick the Miller scooped his first win in 1929. The 4/7 favourite was the first Irish-bred greyhound to win the race, and his trainer, Paddy Horan, was the first trainer from the Emerald Isles to school a Derby winner. Now trained by Wimbledon’s Sidney Orton, Mick the Miller, who was the 4/9F, defended his title in 1930. Before retiring, the greyhound became a fan favourite, winning 19 consecutive races across England.

It was over 40 years before another greyhound won the Derby back-to-back. Patricias Hope put an end to the drought with successive victories in 1972 and 1973. ’72 was a particularly successful year for Patricias Hope, as the Adam Jackson-trained greyhound landed the Triple Crown, with wins in the Welsh and Scottish Greyhound Derby’s, as well as the Derby – a feat he shares with just two other dogs. After a kennel switch to those of Ireland’s Johnny O’Connor, Patricias Hope, who was priced at 7/2 in the final, scooped back-to-back Derby’s. In 1974, the dog was retired as one of the most successful in the history of the sport.

Not many people would have tipped Rapid Ranger to be a Greyhound Derby winner in the early days of his career, but when he switched kennels from Ray White to Charlie Lister, who was already a Derby-winning trainer, after Some Picture’s victory in 1997, his career really took off. Rapid Ranger entered the 2000 final as the 7/4F, and proved his worth, winning by over three lengths. Following his victory, his owners debated retiring him, but their decision otherwise proved worthwhile, as in 2001, Rapid Ranger added his name to the short list of dogs who have won the prestigious race twice. After yet another overturned retirement verdict, possibly down to the temptation of three victories in a row, Rapid Ranger was entered into the 2002 Derby. However, it was a step too far, and he was knocked out in the third round.

Related:  5 Of The Most Comfortable Slides To Wear At Home In Harlem

It was a mere four years before another greyhound landed back-to-back titles, and that was in the form of Westmead Hawk in 2005 and 2006. The Nick Savva-trained dog made hard work of his two victories in the mid-2000s. Having gone into the ’05 final as the 5/4F, Westmead Hawk’s chances of victory looked slim, as he trailed behind the leaders. However, a late burst of pace resulted in him taking over Blonde Mac on the final bend to win the race by almost two lengths. Back in the final in ’06, this time as the 4/7F, he once again lagged behind the front-runners, but, in similar fashion, he made up the ground around the final turns, and won by just short of a length. An injury, which was picked up just one month after his second Derby triumph, was enough to have him retired. However, Savva wasn’t finished yet, winning the 2007 Derby with Westmead Hawk’s half-brother Westmead Lord. Still to this day, Savva’s kennel is the only one to have won three successive Derbies.