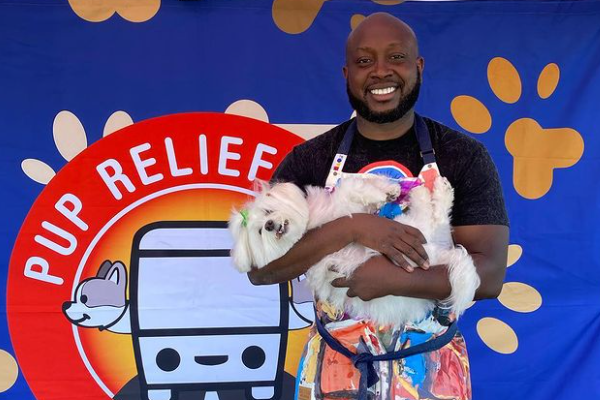 Brian Taylor, also known as “The Dogfather of Harlem.” The New Yorker took his mission across the country to help pups and pet owners experiencing hardships during these challenging times due to the pandemic. This relief tour was made possible by the kindness of strangers and supporters of Taylor who have been donating to his GoFundMe, launched in 2020.

Taylor just finished the 2021 tour where he worked with 63 black groomers in five cities (Philly, Orlando, Birmingham, Fort Wayne, and Vegas) and groomed 829 pups for free.

August also marks National Black Business Month in the U.S., a time when individuals and businesses recognize Black-owned businesses across the country.

According to Zippia, only 4.2 percent of dog groomers are Black, a number that Taylor hopes to to change by raising awareness through his fundraiser.

According to Zippia, only 4.2 percent of dog groomers are Black, a number that Taylor hopes to to change by raising awareness through his fundraiser.

“I was born in West Africa and I came to Harlem to be around Black excellence so the fact that I’m there now and I’m a business owner and I support the community the way it is, that’s the excellence of Harlem,” said Taylor.

Taylor has documented the entire process with pictures and videos which can be found on his Instagram. His mission, however, is not complete.

Related:  Janet Rodriguez And Henry A. Smith Talk So Harlem Holiday Pop-Shop, The Renaissance Of Artisanal Culture And More