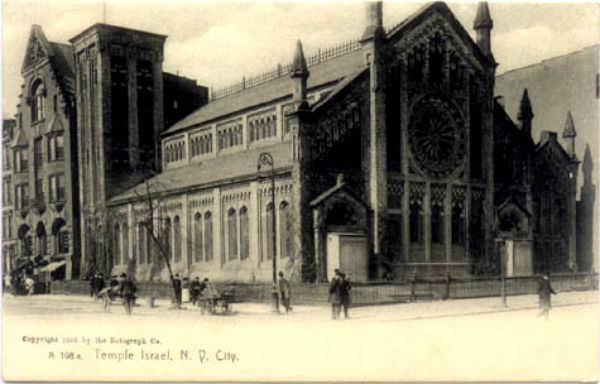 Temple Israel was founded in 1870 as Congregation “Hand in Hand” (Yod b’Yod in Hebrew) in the then remote Jewish community of Harlem. The congregation met at first above a printing shop at 216 East 125th Street. According to early descriptions, its founders were “people of moderate circumstances, many of them having small stores on Third Avenue and living behind their shops.” The founders, of German origin, were traditionally observant Jews who took their Jewish responsibilities seriously and understood the broad sweep of Jewish history. One of their first acts was to establish a religious school called “The Gates of Learning,” which grew as rapidly as the congregation.

In 1874, the synagogue congregation moved to larger quarters on 124th Street. By 1876 the congregation was in its third temporary home, the former Grace-Emmanual Episcopal Church of Harlem at 214 East 116th Street that was leased and later purchased in 1880. Fundraising efforts such as a grand Chanukah dress ball held at the Harlem Casino in 1887 occupied a great deal of the energies of the leadership of the congregation. It was estimated that 2,000 ladies and gentlemen, elegantly costumed, attended the event. A great deal of money was raised for the Hebrew School of Harlem.

Harlem experienced a real estate boom due in part to the opening in 1904 of the IRT subway. In 1905, Temple Israel sold their Fifth Avenue property to a developer for a handsome profit and made plans for a new temple on the northwest corner of Lenox Avenue and 120th Street. The Fifth Avenue building was razed and the congregation worshipped temporarily in Calvary Methodist Episcopal Church, located at 129th Street and Seventh Avenue. Plans for the new temple were drawn up by Arnold W. Brunner, a German-Jewish architect from New York who had studied in Paris at the Ecole des Beautx-Arts. Brunner departed from the traditional Moorish architecture by designing a simple but substantial Neoclassical building that featured fluted Ionic columns at the entrance. The auditorium on the main floor provided seating for 1,800 persons, and in the high basement were divided classrooms. Construction began in 1906, and on June 5 that same year the cornerstone was laid in the presence of 600 members with Attorney General Julius M. Mayer as the principal speaker. On Friday evening, May 17, 1907, the new temple was dedicated, as reported by The New York Times (May 18, 1907): “The throng of people who tried to enter the new edifice was so great that at the time the services began it was found necessary to lock the doors. It was said that many members of Calvary Methodist Episcopal Church were present.” In 1909, the congregation joined the Union of American Hebrew Congregations, the national organization of Reform synagogues.

Over the next few years, Harlem investors overdeveloped and the area began a rapid decline as lower-income people, including many blacks, moved into the area once home to mainly Irish and Jewish residents. Many Jews moved to Manhattan’s Upper West Side, but Temple Israel remained in its Lenox Avenue for 13 years before it, too, made its next move. In July 1920, Temple Israel sold its handsome edifice on Lenox Avenue to a Seventh-day Adventist church (the building was sold in 1925 to its present owners, Mount Olivet Baptist Church). After leaving Harlem, the temple congregation began holding services in the Scotch (Second) Presbyterian Church on Central Park West and 96th Street. The property was purchased on the southwest corner of 91st Street and Amsterdam Avenue, and funds were raised to construct a new temple that would cost about $500,000. Architect William Tachau designed the Neoclassical building that was dedicated on Friday evening, September 21, 1922. In recognition of its new location, the congregation took the name Temple Israel of New York in 1924. Here, the congregation grew considerably and by 1929 had more than 950 members.

Following the end of World War II, the established neighborhoods of the Upper West Side were transformed with the arrival of a new wave of immigrants, including many Dominicans and Puerto Ricans. Once again, much of the Jewish population relocated, this time across Central Park to the Upper East Side, and Temple Israel followed its members. Arrangements were made for temple services to be held in the Unitarian Church of All Souls on Lexington Avenue and 80th Street, and the property on West 91st Street was sold (the building is now home to Young Israel of the West Side).

On March 1, 1964, ground was broken for the present temple at 112 East 75th Street. Designed in the Brutalist style by Peter Claman of Schuman & Lichtenstein, the building has a 100-foot-wide windowless limestone facade that juts over the recessed base and entrances. A cylindrical core rises through the structure to two floors above the roof of the basic structure. In the lower part of the cylinder are two sanctuaries with a total seating capacity of 950 persons: the lower sanctuary seats 450 and is enclosed by 28 stained glass window panels designed by Efraim Weitzman, a specialist in ritual decoration. The two-story portion of the cylinder above the roofline contains classrooms for religious instruction. Under the classrooms is a glass-walled rectangular section—containing a nursery school and meeting rooms for young people—with an adjoining terrace that extends the building’s width. Below the street level is an auditorium, a dining room of banquet size and a kitchen. The new temple, although uncompleted, was opened on Thursday, September 15, 1966—the first day of Rosh ha-Shanah and the beginning of the Jewish New Year 5727—when the temple leaders, in a bow to tradition, carried the torahs into their new $3-million home. The newly-completed sanctuary and its 30-foot-high aluminum ark of the covenant were consecrated on Friday, April 14, 1967. The cylindrical ark, designed by Efrem Weitzman as a huge, free-standing scroll, has lace-like exterior gates that guard the Torah which rests on a rock quarried from the slopes of Mount Sinai.