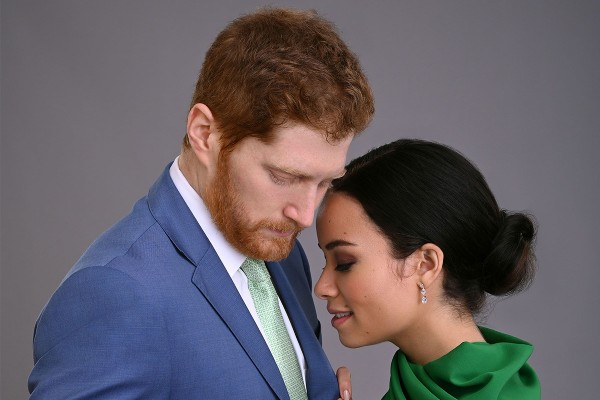 Settle in with a hearty serving of tea, scones, and a raised finger as Lifetime (yes, the same folks who brought us Wendy Williams: The Movie) celebrates the end of summer with a day of programming devoted to the royals.

Kicking things off on Labor Day, Monday, September 6, 2021, at 8 pm ET/PT is the world premiere of Harry & Meghan: Escaping the Palace, starring Jordan Dean (The Punisher) and Sydney Morton (She’s Gotta Have It) as the Duke and Duchess of Sussex.

Leading into the premiere of the third installment in the Harry & Meghan franchise, Lifetime will present encore airings on September 6, 2021, of William & Kate at 1 pm ET/PT followed by Harry & Meghan: A Royal Romance at 3 pm ET/PT and Harry & Meghan: Becoming Royal at 5:30 pm ET/PT.

Harry & Meghan: Escaping the Palace explores what really happened inside the palace that drove Harry (Dean) and Meghan (Morton) to leave everything behind in order to make a future for themselves and their son Archie.

The movie will detail Meghan’s growing isolation and sadness, their disappointment that “The Firm” was not defending them against the press’s attacks and Harry’s fear that history would repeat itself and he would not be able to protect his wife and son from the same forces that may have contributed to his mother’s untimely death.

Harry & Meghan: Escaping the Palace will examine the dynamics between Will (Whalen) and Harry, Kate (Mitchell) and Meghan, and Harry with Will and Charles (Coulter), that lead to the ultimate break from the royal ties.

Harry & Meghan: Escaping the Palace is executive produced by Merideth Finn and Michele Weiss. Menhaj Huda will direct from a script by Scarlett Lacey.