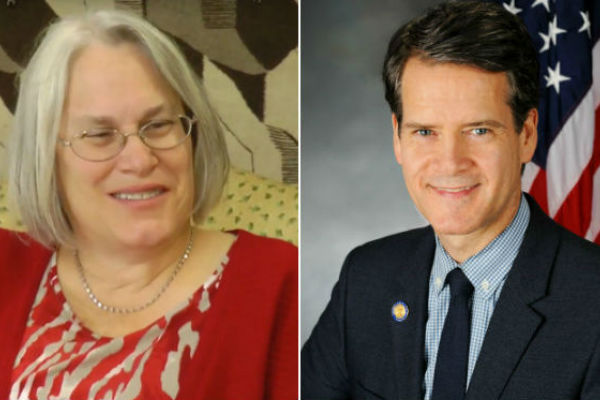 Today, the New York State Senate passed S.52A/A.5991A, legislation authored by Assemblywoman Helene Weinstein and Senator Brad Hoylman that will protect New Yorkers from SLAPPs: Strategic Lawsuits Against Public Participation. This legislation would protect the First Amendment rights of New Yorkers and prevent the rich and powerful from abusing our legal system to silence their critics.

Senator Hoylman said:  “For decades, Donald Trump, his billionaire friends, large corporations and other powerful forces have abused our legal system by attempting to harass, intimidate and impoverish their critics with strategic lawsuits against public participation, or ‘SLAPP’ suits.

This broken system has led to journalists, consumer advocates, survivors of sexual abuse and others being dragged through the courts on retaliatory legal challenges solely intended to silence them.

Today, New York  ‘SLAPPs back’ with our new legislation (S.52A/A.5991A) that expands anti-SLAPP protections, thereby strengthening First Amendment rights in New York State, the media capital of the world. I’m thrilled to see this legislation pass the Senate today thanks to the leadership of Senate Majority Leader Andrea Stewart-Cousins and alongside my Assembly colleague Helene Weinstein.”

Senator Hoylman and Assemblywoman Weinstein’s legislation, S.52A/A.5991A, would expand New York’s anti-SLAPP statute, ensuring New Yorkers are protected from frivolous litigation that is intended to silence their exercise of the rights of free speech and petition about matters of public interest.

The legislation disincentivizes frivolous SLAPP suits by requiring courts to more efficiently and expeditiously consider motions to dismiss SLAPP suits and awarding attorneys’ fees to those who successfully defeat a SLAPP.

In doing so, this legislation will protect the free press and others expressing themselves on matters of public interest from bad actors who weaponize the civil justice system by filing baseless lawsuits intended to silence and bankrupt.

Diane Kennedy, President of the New York News Publishers Association, said: “New Yorkers should have the right to access books, magazines, newspapers, films and all forms of public discourse. This important legislation dramatically strengthens New York State’s protection of the rights of all New Yorkers to engage in discussion of matters of public interest, free from the fear of expensive frivolous litigation brought by moneyed interests seeking to silence critics.”

Jennifer Klein, Chief Strategy and Policy Officer at TIME’S UP, said: “Over the past three years, we have seen the same horrible tactic employed over and over again. When people who have been sexually harassed, abused, or assaulted have the courage to speak out, the pattern of abuse only continues when they get ‘slapped’ with a costly defamation lawsuit brought by those who abused them in the first place. Senator Hoylman’s bill will make it harder both to punish survivors who have the guts to speak out and to scare others from doing the same.”

Suzanne Nossel, CEO of PEN America, said: “Senator Hoylman was right to champion New York’s anti-SLAPP statute, a crucial measure to push back against lawsuits that are filed in an effort to deter and punish people for speaking out on matters of public concern.

This essential measure will safeguard our public discourse from burdensome and frivolous litigation that is aimed to stifle civic discourse. We thank Senator Hoylman for his leadership in standing up for free speech rights.”

Justin Harrison, Policy Counsel at NYCLU, said: “For too long, New York’s weak anti-SLAPP law has allowed those in the public eye to use frivolous lawsuits to punish critics, silence journalists and whistleblowers, and stifle opinions protected by the First Amendment.

This bill will ensure reporters, academics, writers, publishers, artists, critics, and commentators who speak truth to power won’t be silenced by expensive litigation. The NYCLU applauds the passage of this important bill, and all the members and staff who worked to protect our right to public debate.”

Michael McKee, Treasurer, Tenants Political Action Committee, said: “Baseless lawsuits are used by powerful interests to drag tenant and consumer advocates into court to harass and silence them. I should know. Our organization has had to go to great time and expense over the last several years fending off a frivolous lawsuit filed by the landlord lobby in retribution for our advocacy of tenant rights. I’m grateful to Senator Hoylman and Assemblywoman Weinstein for passing this new anti-SLAPP legislation that will protect advocates like me in standing up for tenant rights.”

Currently, New York’s anti-SLAPP statute is only used rarely, due to its narrow scope; approximately 30 states, including California, Texas, Nevada and Oklahoma, have anti-SLAPP statutes that are stronger. Senator Hoylman and Assemblywoman Weinstein’s legislation expands on the existing statute by covering speech (or other lawful First Amendment conduct) related to an issue of public interest.

If a defendant’s speech or activity falls under the protection of the newly-broadened statute, judges will have the ability to dismiss these cases and require the entity who brought the frivolous lawsuit to cover the defendant’s legal fees.

The legislation was passed at a time when advocates and journalists are under attack—both in the United States and across the globe. President Trump’s campaign has filed a SLAPP suit against a Wisconsin television station that aired an advertisement critical of President Trump’s handling of the COVID-19 crisis; the campaign has taken similar action against New York-based news outlets, such as the New York Times, that publish criticism of the president.

SLAPP suits have also been used to intimidate survivors of sexual abuse, silence political critics, and even to intimidate tenant leaders in New York, as in the case of the REBNY’s $40 million defamation lawsuit against TenantsPAC leader Mike McKee.

Editor’s Note: Harlem World Magazine agrees with this legislation to protect the First Amendment rights of New Yorkers and prevent the rich and powerful from abusing our legal system to silence their critics. If our elected officials from Harlem to Hawaii do not protect these rights – then who will?