See The Next World Star As The Amateur Night Auditions Return At The Apollo, In-Person And Virtual 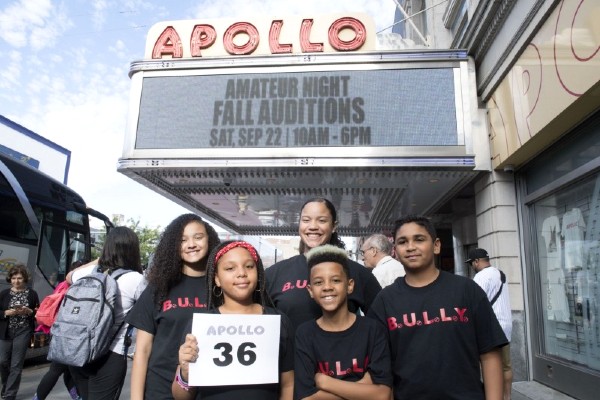 On Saturday, October 9, and Sunday, October 10, 2021, the Apollo will hold in-person auditions at its legendary theater for the 2022-23 season of its signature program, Amateur Night at the Apollo.

Amateur Night at the Apollo was the original talent show and one of the longest-running events in New York City. Auditions will be held at the Apollo on a first-come, first-served basis beginning at 9 a.m. ET through 6 p.m. ET.

Each day, Amateur Night producers will audition the first 200 vocalists, rappers, dancers, instrumentalists, comedians, spoken-word artists, and other performers vying for a coveted spot on Apollo’s stage, where they will compete for a chance to win the $20,000 Grand Prize.

Performers between the ages of 12 and 17 will compete for a spot in the “Child Star of Tomorrow” category and a $5,000 prize. Amateur Night at the Apollo returns live and in-person for its 32-night competition on Wednesday, February 22, 2022.

In order to ensure the health and well-being of Apollo staff, performers, and the community, all audition participants and chaperones must show a completed vaccination record (digital or physical copy accepted), along with a government-issued photo ID. Masks will be required for entry into the Apollo. In addition to in-person auditions, the Apollo will continue to accept online audition submissions.

Since its inception in 1934, the Apollo’s signature Amateur Night continues to gain global recognition for launching the careers of thousands of performers and attracting audiences from all over the world. Amateur Night has long been revered by artists as a transformative experience where up-and-coming talent feel the power of the legendary performers who have come before them, and where audience responses can help make or break a career.

Legendary performers who launched their careers on the Apollo Amateur Night stage have included Ella Fitzgerald, Luther Vandross, Lauryn Hill, and H.E.R. Beginning in 2017, the Apollo incorporated online submissions into its audition process to extend access to artists around the globe and diversify the talent featured in the show. In 2019, the Apollo launched Amateur Night Japan, the first-ever licensing partnership that brought the famed contest to Japan, presented by Yoshimoto Kogyo Co., Ltd.

For a complete list of audition guidelines, please visit http://www.apollotheater.org/amateur-night/auditions/

All contestants, including parents and chaperones, must be fully vaccinated and be able to show proof of vaccination and photo ID in order to participate in Amateur Night auditions. Face masks are mandatory for entry to the Apollo.

Amateur Night at the Apollo is made possible by leadership support from Coca-Cola.

The non-profit Apollo Theater is a performing arts presenter, commissioner, and collaborator that also produces festivals and large-scale dance and musical works organized around a set of core initiatives that celebrate and extend the Apollo’s legacy through a contemporary lens, including the Women of the World (WOW) Festival as well as other multidisciplinary collaborations with partner organizations.

Since introducing the first Amateur Night contests in 1934, the Apollo has served as a testing ground for new artists working across a variety of art forms and has ushered in the emergence of many new musicals genres-including jazz, swing, bebop, R&B, gospel, blues, soul, and hip-hop.