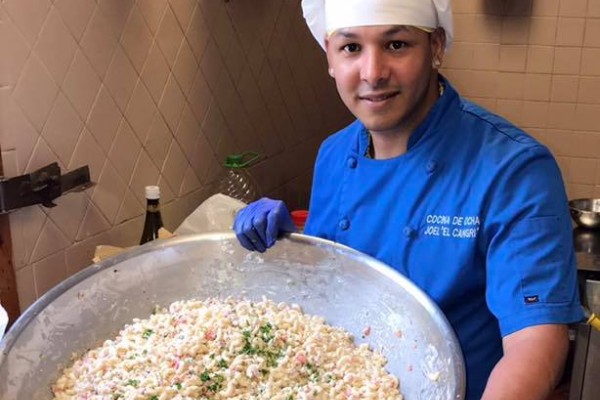 In the Lucumi tradition, food offerings are as important as any other offering. The alashe is a ritual chef versed in the meticulous preparation of the adimu- or sacred foods- of the orisha during initiations, rituals, and celebrations for the orisha.

Each orisha has food taboos and preferred foods that nourish and honor the orisha, their Ashé, and the practitioners who honor them.

The alashe is charged with ensuring the integrity of ritual dishes and ensuring that all appropriate food protocols are followed and that adimu are prepared precisely as dictated by tradition during religious functions.

Alashe Joel “El Cangri” Rosado will guide us through the basic rules of ritual food preparation, and teach us to prepare several adimu honoring the orisha designated as “ruling” the year in the Letra del Año during this live, interactive master class.

In recognition of the role that spirituality plays in the cultures of African people and their descendants, CCCADI respectfully weaves these spiritual elements into the fabric of its programming.

The Center presents much of its spiritually-based activities in collaboration with traditional spiritual leaders, practitioners, cultural activists, and artists that retell and pass on the stories and practices that bind African descendants into one holistic family building resilience today and into the future.

Each of CCCADI’s programs asserts the centrality and relevance of African, African American, Afro-Caribbean, and Afro-Latino culture.

This past Juneteenth, 2020, CCCADI launched the #ArtsGoBlack campaign to challenge the arts and culture field to actively address racial inequality.