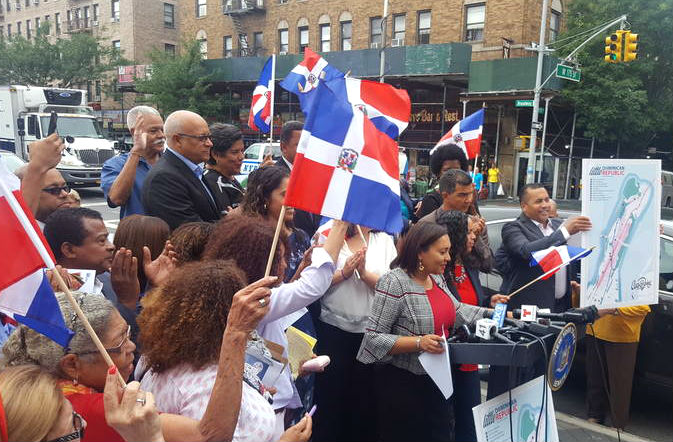 Today, Rep. Espaillat released the following statement addressing his resolution, honoring the contributions of Dominican-Americans and the impact of the Dominican diaspora throughout New York’s 13th congressional district:

“During more than 25 years of public service, throughout my time in the New York State Senate and Assembly, and in each of my three terms in Congress I have introduced a resolution recognizing the Dominican community’s presence in northern Manhattan. Symbolic in nature, the resolution acknowledges and highlights the rich historic, cultural, business, artistic, and political Dominican presence in northern Manhattan and reflects the tremendous diversity that my congressional district has to offer.

“Following the 2021 introduction of the resolution, coined H.Res.77, I heard from Community Board 9 and others from the community who expressed concerns about the intent of the resolution. I welcomed all feedback and have held numerous collaborative virtual discussions with my staff and Community Board members to allow residents to provide suggestions and express any concerns they had regarding the resolution.  As such, I have reintroduced a revised resolution, H.Res.717, which honors the longstanding history of the Dominican American community in parts of Washington Heights and Inwood, the enclave of the Dominican American diaspora in New York City.

“This resolution highlights important historical events, streets, buildings, schools and cultural sites recognized through academic research and supports the inclusion of these neighborhoods in a national historical federal registry. The intent of H.Res.77 was never to legally change the name of Hamilton Heights, Washington Heights and Inwood to ‘Quisqueya Heights,’ which is extrinsic to the purpose of congressional simple resolutions. It was, however, always my intention to honor the contributions of Dominicans to this area and to reiterate my call to action to ensure the affordability of the neighborhoods that many Dominicans have called home for generations.

“The beauty and diversity of my congressional district, which includes Harlem, recognized as the Black mecca of the world; East Harlem (El Barrio), a vibrant showcase of Puerto Rican culture; and the immigrant communities of Washington Heights and Inwood, the center of the Dominican diaspora in the United States, should be recognized. It is my hope that by highlighting the strong Dominican American heritage and familial bonds, we can preserve our bright and beautiful neighborhood, amplify the diversity of New York’s 13th congressional district, and come together in unity to help strengthen our communities – for years and generations to come.”