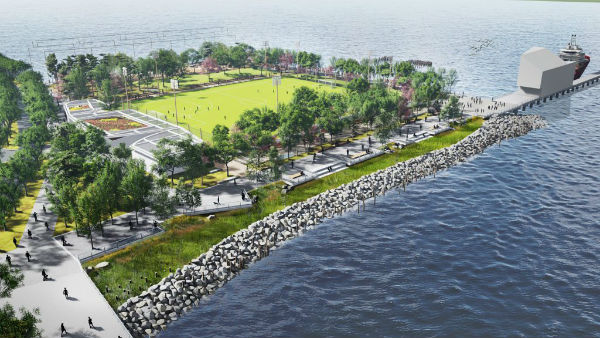 A former Department of Sanitation facility on the Gansevoort Peninsula in Hudson River Park just 30 minutes from Harlem will soon be a 5.65-acre park with a beach. This week Hudson River Park Trust unveiled renderings of the public space designed by James Corner Field Operations, also responsible for the High Line, South Street Seaport, Greenpoint Landing, and Domino Park.

The park will include a variety of amenities including a sports field, salt marsh, habitats, a sandy beach with kayak access, and sitting and entertaining areas that span from Gansevoort Street to Little West 12th Street along what is essentially 13th Avenue. According to Curbed, to acknowledge the site’s history, the parkland will also include Day’s End, a public art installation created by Harlem fave David Hammonds and commissioned by the Whitney Museum.

Although the preliminary plans have been announced, the design has yet to be finalized. Construction is expected to start in late 2020 and is to completed by the middle of 2022 reports NYYimby.