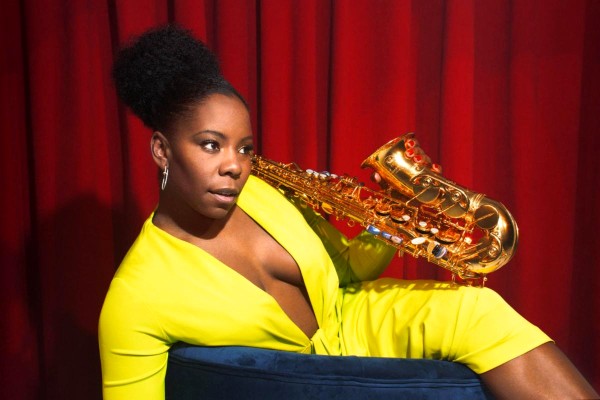 Grammy-nominated saxophonist Tia Fuller is more than a talented composer, bandleader, and educator. She is a visionary – a cultural innovator keeping the tradition of women in jazz alive, and her latest achievement is proof of that.

Last December, the award-winning recording artist served as the sound behind the music of animated character “Dorothea Williams,” the sassy saxophonist (voiced by actress Angela Bassett) from the blockbuster Pixar film Soul.

This year, Fuller, a professor at Berklee College of Music in Boston, is continuing her mission of music education and women’s empowerment with an online master class, an Instagram Live series, and a new album.

Fuller has more than earned her status as one of the jazz industry’s most accomplished artists.

Her storied career includes touring with superstar Beyonce, appearing in a national ad campaign for women’s retailer J. Jill, gracing the covers of Downbeat and JazzTimes, and a feature in Vanity Fair.

Still, she never misses an opportunity to highlight the women pioneers of jazz who came before her: 20th century women like tenor saxophonist Viola “Vi” Burnside, alto saxophonist Vi Redd and pianist Mary Lou Williams; or contemporary artists such as bassist Esperanza Spalding, pianist Geri Allen, and drummer Terri Lyne Carrington. These women make up the legacy that Fuller is dedicated to promoting awareness of.

Born in Aurora, Colorado, she grew up in a family of musicians. Her father, Fred, is a professional bass player, her mom, Ethiopia, is a singer, her sister, Shamie, is a pianist, and her brother, Ashton, is a drummer.

In 2006, Fuller was selected to join Beyonce’s all-female band and traveled the world performing as part of the I AM … Sasha Fierce and Beyoncé Experience World Tour.

She also became a featured soloist on the Beyoncé Experience DVD (Me, Myself and I), I AM Yours I DVD (Wynn Theatre) and appeared on several major television shows, including the Today Show, Good Morning America, The Oprah Winfrey Show, BET Awards, American Music Awards, Grammy Awards and as a featured soloist with Beyoncé for President Obama at the White House.

Fuller has recorded five full-length albums, including her most recent Diamond Cut, which earned her a Grammy nomination in 2019 in the “Best Instrumental Jazz” category, the second-ever female solo artist to achieve this. (Terri Lyne Carrington, who produced Diamond Cut, was the first).

Later in April 2019, she got a call from Pixar who was looking for a musician to play a “badass” saxophone player for an animated film.

An L.A. flight and six-hour recording session later, “Dorothea” was born. Released on Christmas Day 2020, Soul has grossed over $71M to date.

With so much success under her belt, Fuller has her eyes set on mentoring and nurturing the next generation of musicians.

The online course will feature tutorials and techniques to enhance a player’s improvisation and solo skills as well as masterclasses by world-class saxophonists.

These bi-weekly conversations will target current and post-graduate students and cover a variety of topics, including transitioning from college to the “real world” and the ups and downs of a working musician.

Also in the works is a “Black Girls Rock” virtual roundtable for Berklee students. She is also working on her next album with plans on a late Fall or early 2022 release.

“While there is so much more I’d like to accomplish in my career, I’m really focusing this year on investing in future musicians and advocating for more awareness of women in jazz,” says Fuller. “As an artist, I never wanted to just make music. My dream is to contribute to the culture in a way that ensures that jazz will thrive for generations to come.”