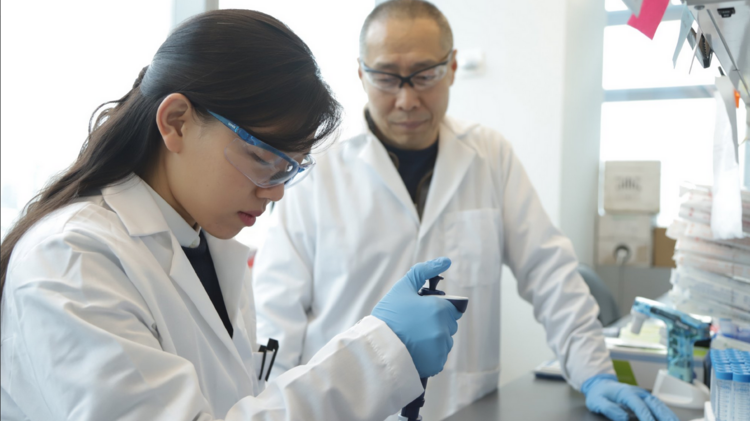 Currently Quentis has 16 employees, with a growth projection to 24 full-time employees in the next year, and a total of 50 employees over the course of five years specializing in drug discovery research and development, including expertise in immunology, oncology, and chemistry. Quentis’ new headquarters will support West Harlem’s biotech cluster, which includes CUNY’s Advanced Science Research Center, City College’s Center for Discovery and Innovation, Harlem Biospace, New York Structural Biology Center and the Zuckerman Mind & Brain Institute.

“We’re thrilled to launch the LifeSci NYC Expansion Space fund to support biotech companies, like Quentis, who are creating quality jobs for New Yorkers through their work,” said New York City Economic Development Corporation President and CEO James Patchett.“ New York City already has the best research institutions in the world, and by investing in lab space, talent and supporting emerging companies, we can strengthen the City’s position as a global leader in life sciences.”

“Our partnership with NYCEDC will allow us to continue to grow in New York City. West Harlem offers easy access from all of New York City Boroughs and the surrounding Tri-State area and provides close proximity to some of the best research institutions in the country with access to world-class talent and state-of-the-art space.”

“From our inception, we were committed to being a New York City-based biotechnology company but were faced with the challenge of finding suitable space that could accommodate our needs,” said Michael Aberman, MD, President and CEO of Quentis Therapeutics. “Our partnership with NYCEDC will allow us to continue to grow in New York City. West Harlem offers easy access from all of New York City Boroughs and the surrounding Tri-State area and provides close proximity to some of the best research institutions in the country with access to world-class talent and state-of-the-art space.”

“This announcement is good news for the City. One of the driving mandates for the LifeSci initiative is to provide growth support for young companies in New York City, and the Expansion Space Fund alleviates some of the growing pains caused by a shortage of laboratory space to accommodate near-term growth,” said Dr. Vicki Sato, Co-Chair of the Mayor’s Life Sciences Advisory Council. Quentis is a clear example of a company founded on science from one of our City’s great institutions, matured by a New York entrepreneur, funded by local investors, and now will have the opportunity to continue to grow here. This story illustrates how breakthrough R&D companies can continue to have a future in the city, ultimately becoming a sustainable part of our future economy.”

“The biotechnology sector provides incredible potential for job creation and New York City must make every effort to stay on top of this rapidly growing field,” said Council Member Paul Vallone, Chair of the Committee on Economic Development. “As part of NYCEDC’s LifeSci NYC Expansion Space Fund, this allocation will allow Quentis to expand rapidly, driving innovation and creating jobs. As we look for effective means to promote economic growth in our city, initiatives like this are promising and exciting. New York City is poised for a bright and successful future in biotech research and development.”

“New York City continues to aggressively support long-term job creation in emerging industries through this investment in West Harlem’s biotech industry,” said Council Member Peter Koo. Closing this deal will effectively administer the shot in the arm for the industry as it looks to provide the essential space and resources biotech companies need to succeed.”

With more than 100 research foundations and nine academic medical centers, New York City is home to one of the largest concentrations of academic life sciences research in the world. However, challenges such as the shortage of laboratory space have made it difficult to retain high-growth life science companies. Unlocking life sciences space and delivering good-paying jobs is part of the de Blasio Administration’s efforts to establish New York City as a global leader in life sciences research and innovation. In December 2016, Mayor de Blasio announced LifeSci NYC, a 10-year $500 million commitment to establish New York City as a leader in life sciences R&D and innovation, spurring an estimated 16,000 quality jobs and addressing the need for up to three million square feet of new space for life sciences companies and researchers.

NYCEDC has made significant efforts to catalyze the growth of New York City’s life sciences industry by creating a $300 million discretionary tax abatement incentive program and modernizing the City’s land use policy to facilitate life sciences real estate development. As part of LifeSci NYC, the City has awarded a $5 million grant to fund approximately 50,000 square feet of new incubator lab space, approved a $10M fund to help NYC companies expand in NYC and launched an internship program to train the next generation of life sciences talent. More information and applications for the Expansion Space Fund can be found here. Since the start of the internship program, 118 students have participated in gaining both business and scientific experience from NYC based companies.

Earlier this year, NYCEDC released a request for expressions of interest including $100 million and city land to build a new applied life sciences campus focused on commercial R&D and include space for companies to grow and exchange ideas. LifeSci NYC also includes $50 million to expand the network of R&D facilities. NYCEDC expects to release a request for proposals before the end of the year.