As advocates from the streets to the boardrooms call for greater funding of Black-led organizations.

A new brief from the National Committee for Responsive Philanthropy (NCRP) finds that only 1% of grantmaking by some of the largest local community foundations goes to Black communities, even though they represent a combined 15% of the population in areas served by those institutions.

NCRP’s brief, “Black Funding Denied: Community Foundation Support for Black Communities” looks at the latest available grantmaking data (2016-2018) of 25 community foundations (CFs) – from Los Angeles to New Orleans to New York City to St. Paul. These foundations represent a cross section of some of the country’s largest community foundations as well as foundations in communities where NCRP has Black-led nonprofit allies.

While community foundations in these cities cumulatively spent $78 per person overall, they only spent $6 per Black person.

What researchers found was disappointing, but not surprising: While community foundations in these cities cumulatively spent $78 per person overall, they only spent $6 per Black person.

“Community foundations have a special relationship — and responsibility — to local residents. They, more than anyone, should know the value and potential of those closest to them,” said NCRP President and CEO Aaron Dorfman. “For philanthropy to succeed in helping to make this nation more equitable, it needs to address the systematic ways that it is complicit in under-resourcing countless of Black communities nationwide.”

NCRP sought to analyze the data as a way of helping its nonprofit members and partners survive and thrive in the wake of the coronavirus pandemic and the national uprising sparked by the murders of George Floyd and Breonna Taylor. The initial data outreach effort has yielded some preliminary discussions with funders and potential follow-up meetings between local nonprofits.

Community foundations working hard to engage communities and improve their practices view the report as a helpful baseline for their racial equity efforts.

“When we talk about applying a racial equity lens in philanthropy, a core aspect of the work is using data to address racial disparities,” said Denise St. Omer, Vice President of Grantmaking and Inclusion Initiatives at the Greater Kansas City Community Foundation. “In this moment when many community foundations are leaning into the work of advancing racial equity, NCRP’s report helps guide our work and inform our thinking on how we can raise awareness of the critical needs and structural barriers facing the Black Community.”

“29 years ago, NCRP issued a report that called in and inspired Seattle Foundation to create initiatives centering communities most impacted by racial and economic inequities. Since then, we have learned so much from and increased our investments in Black-led organizations,” said Seattle Foundation President and CEO Tony Mestres. “This latest NCRP report is important and timely, highlighting a historically persistent problem across the philanthropic sector: the chronic underinvestment in Black-led organizations and movements. In this time of reckoning, we are committed to engaging our philanthropists in advancing racial equity. We must all do better to invest in Black lives, now and in the long term.”

Also:  Statement From David N. Dinkins Regarding The Horrific Killing Of George Floyd 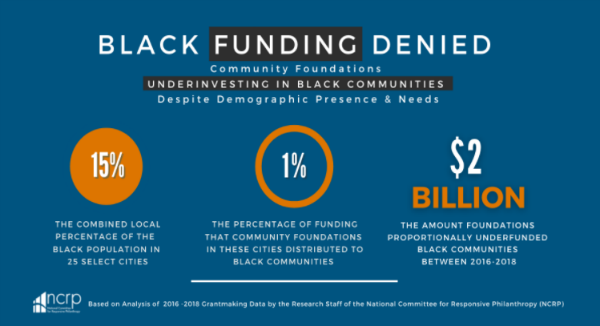 “Funding Black communities at a rate commensurate with their relative size is a floor for equitable funding, not a ceiling,” said NCRP Vice President and Chief Engagement Officer Jeanné Lewis. “The bottom line is that community foundations have neglected their charge to serve their full communities. Regardless of why, we must immediately address how Black Americans have been excluded from community foundation grantmaking writ large.”

…while immigrants and refugees represented 14% of the nation’s population, the share of local philanthropic dollars invested in this community from 2017-2018 was just 1% for service organizations and 0.4% for movement groups involved in advocacy and organizing.

NCRP’s research team found a similar underinvestment in the pro-immigrant and pro-refugee community this past spring in a larger analysis of community foundations nationwide. “Won’t You Be My Neighbor: Local Foundations, Immigrants and Refugee Populations,” found that while immigrants and refugees represented 14% of the nation’s population, the share of local philanthropic dollars invested in this community from 2017-2018 was just 1% for service organizations and 0.4% for movement groups involved in advocacy and organizing. The report’s open source data tool provides snapshots of total local foundation giving for immigrants and refugee-serving organizations and the pro-immigrant, pro-refugee movement in all 50 states and the District of Columbia. It also details the share of funding that went to these groups by each state’s local grantmakers.

Explore the figures by visiting http://www.ncrp.org/2020/08/black-funding-denied.html

Answers to Frequently Asked Questions (FAQ) about the data, including methodology, are available here

NCRP amplifies the voice of nonprofits and the communities they serve in the philanthropic sector. Through research and advocacy, it works to ensure that grantmakers and donors contribute to the creation of a fair, just and equitable world. The organization’s Movement Investment Project is a long-term initiative that looks to provide data, campaigns and other tools to drive more philanthropic resources to social movements so that the organizations leading the way towards a fairer, more inclusive and just future can succeed. For more information, visit https://www.ncrp.org/