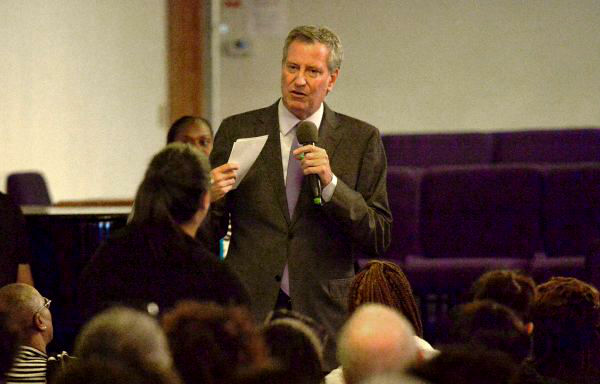 Mayor Bill de Blasio announced that the City is launching a robust voter registration and information campaign to help incarcerated individuals exercise their right to vote. For the first time ever, the City will facilitate direct pick-up and delivery of voter registration forms and absentee ballots, bypassing the jail mailing system to ensure timely delivery of paperwork. The effort is being led in partnership with the Department of Correction, the Legal Aid Society and the Campaign Finance Board.

“Voting access must be expanded and protected in our city. That applies to everyone, including people in custody,” said Mayor Bill de Blasio. “This initiative will help more incarcerated New Yorkers participate in our democracy and have their voices heard.”

“With DemocracyNYC, we’re ensuring that every New Yorker exercises their right to have their voices heard,” said Deputy Mayor J. Phillip Thompson. “Incarcerated individuals have that right as well, and we’re working to get them the information they need to vote and become active participants in our democracy.”

“Even though most people in our custody are here only a short time, it is our duty to help them by ensuring that they have appropriate access to the electoral process. Reminding the incarcerated that their vote matters is a powerful way of reinforcing their ties to our community and is just as important as the many job training and re-entry programs we offer every day,” said DOC Commissioner Cynthia Brann.

“Helping New Yorkers become civically engaged and shape the future of city they call home is the core reason why the Mayor’s Public Engagement Unit was created by this administration,” said Mayor’s Public Engagement Acting Director Eric Rotondi. “Expanding our reach to City jails furthers our mission and will ensure that all New Yorkers have the ability to exercise their right to vote.”

“Incarceration does not define these individuals, and they are entitled to express their opinion and deserve to be heard just like everyone else,” said Anthony Posada, Supervising Attorney with the Community Justice Unit at The Legal Aid Society. “We’re proud to help re-enfranchise and empower those New Yorkers who felt they had no role in our democracy because of their incarceration. Voting is a sacred right that helps with the transition back to society and it should never be hindered.”

Before this initiative, registration forms and absentee ballots were processed with other outgoing mail in jail facilities, which is subject to security procedures that may have inadvertently caused missed deadlines. Incarcerated individuals will now fill out and submit forms directly to staff who will ensure registration forms and absentee ballots are delivered to the Board of Elections in a timely manner. There are currently many incarcerated individuals in City jails who are eligible to vote.

On Monday, August 6, volunteers from the Mayor’s Public Engagement Unit, CFB and the Legal Aid Society launched voter registration and Get-Out-the-Vote campaigns within DOC facilities. This included displaying more than 1,200 posters throughout facilities encouraging people who are incarcerated to vote and eventually stocking libraries with non-partisan information about candidates published by CFB’s NYC Votes. Additionally, incarcerated individuals will have the opportunity to attend daily, voluntary discussions with DOC program counselors to learn more about the voting process. The Mayor’s Public Engagement Unit will also begin engaging visitors to City jails and encouraging them to register to vote.

“I support the City’s leadership in facilitating the voter registration and absentee ballot delivery of incarcerated individuals in our jails who are eligible to participate in elections. Our democracy is stronger when it reflects the voices of all who have the right to vote,” said Brooklyn Borough President Eric L. Adams.

“Voting is a fundamental right of all Americans, as is access to it. Making it easier for those in custody of our city jails to vote – many of whom have not been convicted – shows that every voice counts, because they do. Thank you to Mayor de Blasio for your commitment to ensuring that every New Yorker has a chance to vote,” said Council Member Keith Powers, Chair of the Committee on Criminal Justice.

“The Osborne Association applauds the City and the Legal Aid Society for their partnership to ensure that the thousands of people detained on Rikers know that they can vote, are provided non-partisan resources to learn about candidates, and have ready access to registration forms and absentee ballots that will be delivered to the Board of Elections in a timely manner,” said Tanya Krupat, Director of Osborne’s Center for Justice Across Generations. “It is crucial that everyone – especially individuals who are often the subject of electoral campaigns but are less likely to be invited into them – participate in our democracy in every way possible. That this initiative also includes outreach to the 700 adult visitors per day to Rikers further strengthens communities and their civic participation. We stand ready to assist the City in this effort.”