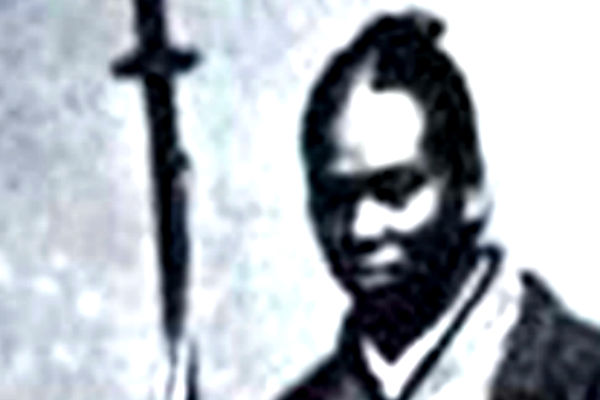 Yasuke (variously rendered as 弥助 or 弥介, 彌助 or 彌介 in different sources.) was a retainer of African origin who served under the Sengoku Period Japanese daimyō Oda Nobunaga. Yasuke arrived in Japan in 1579 in the service of Italian Jesuit missionary Alessandro Valignano, Visitor of Missions in the Indies, in India. Yasuke was present during the Honnō-ji Incident, the forced suicide on 21 June 1582, of Oda Nobunaga at the hands of his samurai general Akechi Mitsuhide

. Yasuke is thought by some to have been the first African that Nobunaga had ever seen, but he was one of the many Africans to have come with the Portuguese to Japan during the Nanban trade.

Theories about the early life

, written by François Solier of the Society of Jesus in 1627, Yasuke was likely from Mozambique. Solier’s account may, however, have been an assumption, as it was written so long after the event. There is no surviving contemporary account that corroborates it.

This would be consistent with other accounts of Africans from Mozambique in Japan. According to Fujita Midori, the first African people who came to Japan were Mozambican. They reached Japan in 1546 as shipmates or slaves who served Portuguese captain Jorge Alvarez (not to be confused with another explorer of the same name who died in 1521).

A 2013 investigation by Discovery of the World’s Mysteries

(世界ふしぎ発見), a popular television program, suggested that Yasuke was a Makua named Yasufe. This name seems to be derived from the more popular Mozambican name, Issufo. This investigation did not necessarily meet journalistic standards, and the program provided little evidence for its conclusions. The Makua are not documented as having had any significant contact until 1585 with the Portuguese based in Mozambique.

Yasuke may have been a member of the Yao people, or from the more inland area of Mozambique. Yao people were just coming into contact with the Portuguese at the time, which might account for his name: that is, Yao added to the common Japanese male name suffix of suke (Yao-suke). 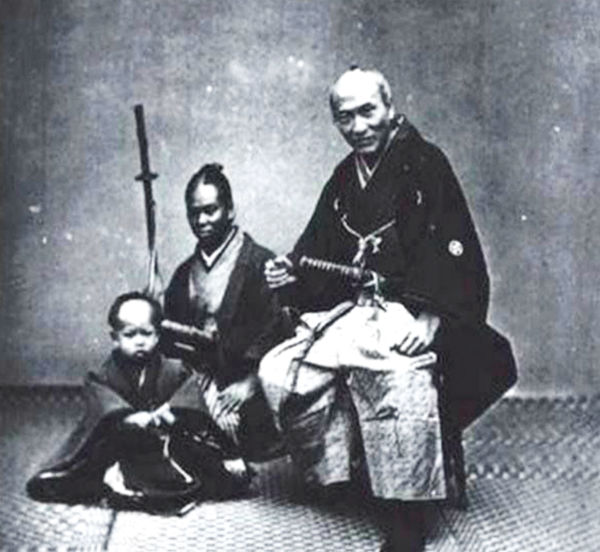 According to another theory, Yasuke was a Habshi from Ethiopia. Thomas Lockley suggested that this theory is most convincing. Like Yasuke, the Habshi were called Cafre by the Portuguese; they were well‐built and skilled soldiers, unlike other east Africans who suffered from famine. According to this theory, his original name might be the Ethiopian Yisake or Portuguese Isaque, derived from Isaac. Yasufe was also used as a surname in Ethiopia.

It is also possible that Yasuke was a Dinka from South Sudan. He was famous for his height and extremely dark skin color. The Dinka people

are among the tallest in Africa, and have darker skin than the Ethiopians, Eritreans, or Somalis. Adult Dinka men had a ritual custom of drawing decorative patterns on their faces by tattooing, but no account of Yasuke having a face pattern was recorded.

Yasuke arrived in Japan in 1579 in the service of the Italian Jesuit missionary Alessandro Valignano, who had been appointed the Visitor (inspector) of the Jesuit missions in the Indies (East Africa, South and East Asia). He accompanied Valignano when the latter came to the capital area in March 1581 and his appearance caused a lot of interest with the local people. 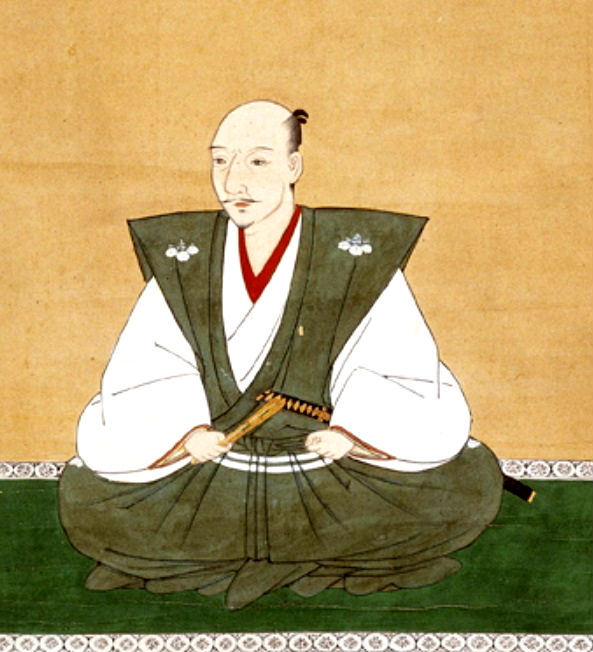 When Yasuke was presented to Oda Nobunaga (pictured above), the Japanese Daimyō thought that his skin must have been colored with black ink. Nobunaga had him strip from the waist up and made him scrub his skin. These events are recorded in a 1581 letter of the Jesuit Luís Fróis to Lourenço Mexia, and in the 1582 Annual Report of the Jesuit Mission in Japan, also by Fróis. These were published in Cartas que os padres e irmãos da Companhia de Jesus escreverão dos reynos de Japão e China II (1598), normally known simply as Cartas.  When Nobunaga realized that the African’s skin was in fact black, he took an interest in him.

(信長公記 Shinchō Kōki) corroborates Fróis’s account. It describes the meeting thus: “On the 23rd of the 2nd month [23 March 1581], a black page (黒坊主 kuro-bōzu) came from the Christian countries. The man was healthy with a good demeanour and Nobunaga praised Yasuke’s strength. Nobunaga’s nephew gave him a sum of money at this first meeting.

On 14 May, Yasuke departed for Echizen Province with Fróis and the other Christians. During this trip, they met local warlords such as Shibata Katsutoyo, Hashiba Hidekatsu, and Shibata Katsuie

. They returned to Kyoto on 30 May. At some point, although when is not clear, Yasuke entered Nobunaga’s service.

It is likely that Yasuke could speak or be taught considerable Japanese, perhaps due to Valignano’s efforts to ensure his missionaries adapted well to the local culture. Nobunaga enjoyed talking with him (there is no indication that Nobunaga spoke Portuguese, and it is unlikely that Yasuke would have been able to communicate in classical Chinese, the Asian lingua franca of the time). He was perhaps the only non-Japanese retainer that Nobunaga had in his service, which could explain Nobunaga’s interest in him. Yasuke was mentioned in the prototype of Shinchō kōki owned by Sonkeikaku Bunko (尊経閣文庫), the archives of the Maeda clan. According to this, the black man named Yasuke (弥助) was given his own residence and a short, ceremonial katana by Nobunaga. Nobunaga also assigned him the duty of weapon bearer.

After the Battle of Tenmokuzan

, Nobunaga led his force, including Yasuke, and inspected the former territory of the Takeda clan. On his way back, he met Tokugawa Ieyasu. Matsudaira Ietada, the retainer of Ieyasu described Yasuke as “6 shaku 2 sun (6 ft. 2 in., or 188 cm.). He was black, and his skin was like charcoal.” Matsudaira stated that he was named Yasuke (弥介).

In June 1582, Nobunaga was attacked and forced to commit seppuku in Honnō-ji in Kyoto by the army of Akechi Mitsuhide

. Yasuke was there at the time and helped fight the Akechi forces. Immediately after Nobunaga’s death, Yasuke went to join Nobunaga’s heir Oda Nobutada who was trying to rally the Oda forces at Nijō Castle. Yasuke fought alongside the Nobutada forces but was eventually captured. When Yasuke was presented to Akechi, the warlord allegedly said that the black man was an animal as well as not Japanese and should thus not be killed, but taken to the Christian church in Kyoto, the Nanbanji (南蛮寺). However, there is some doubt regarding the credibility of this fate. There is no further written information about him after this.

There is no confirmed portrait of Yasuke drawn by a contemporary.

was a distinguished painter patronized by Nobunaga. Eitoku had an audience with Nobunaga when Yasuke served him. The Kanō school was famous for its Nanban byōbu, and there is at least one byōbu depicting a well-dressed black man who could be Yasuke.

An inkstone box made by a Rinpa artist in the 1590s, owned by Museu do Caramulo, depicts a black man wearing high-class clothing, who does not appear to be subordinate to the Portuguese. It is possible that this man is Yasuke in Portuguese attire. 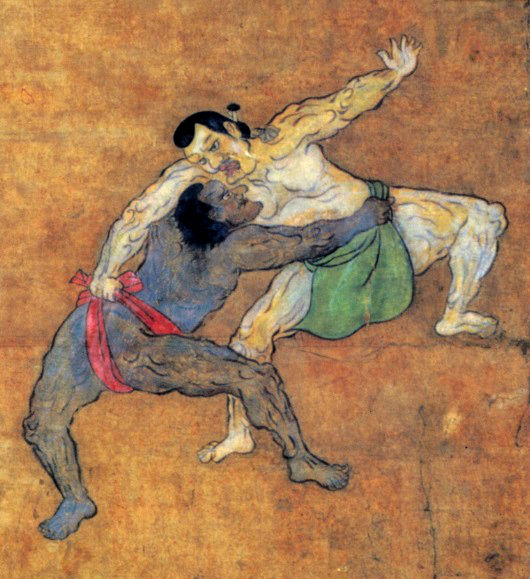 Sumō yūrakuzu byōbu, drawn in 1605 by an anonymous artist, depicts a dark-skinned wrestler with a Japanese man in the presence of noble samurai. This samurai is said to be Oda Nobunaga or Toyotomi Hideyoshi

. Nobunaga was famous for his fondness for sumo and held many official matches. This byōbu is owned by Sakai City Museum