Holocaust Education Bill Passes Both Houses Of The NYS Legislature 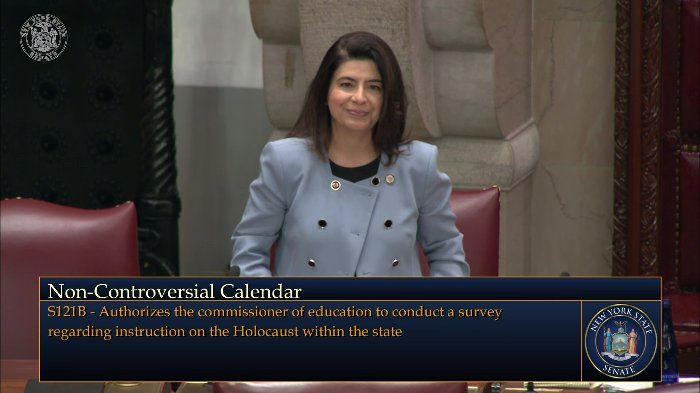 Full resolution photo and HD video of the Senator’s remarks can be downloaded by clicking here.

The bill passed the New York State Assembly with unanimous support earlier this week, and having now passed both houses of the Legislature, will be sent to Governor Kathy Hochul for her consideration.

Senator Anna M. Kaplan said “With antisemitism on the rise, and Holocaust misinformation exploding around the world, it’s never been more important that we learn the lessons of the Holocaust, and ensure our next generation knows about our history, no matter how dark or difficult the conversation may be. It’s why I’ve fought tirelessly to pass the Holocaust Education Bill, and I’m thrilled to be able to pass it today so that we can ensure we Never Forget. As we celebrate the passage of this vital legislation today, I’m so grateful for my partnership with Assemblymember Nily Rozic, for the leadership of Majority Leader Andrea Stewart-Cousins, and for the countless advocates and organizations who fought alongside me since day one of this important effort. To everyone who helped make this happen, thank you.”

A recent study by the nonprofit Conference on Jewish Material Claims Against Germany (Claims Conference) revealed disturbing findings about Holocaust knowledge among New Yorkers ages 18-39, including that 58% cannot name a single concentration camp, 19% believe that Jews caused the Holocaust, and 28% believe the Holocaust is a myth or has been exaggerated.

In each of these three metrics, New York had the worst score of any state in the US.

Legislation introduced in the New York State Senate and Assembly by Senator Kaplan and Assemblywoman Rozic, S.121B/A.472C, would address the problem by ensuring that New York students are learning about the Holocaust in school, something that 90% of the general population considers ‘important’ or ‘somewhat important’ according to a recent study by the American Jewish Committee (AJC).

Photo credit: Senator Anna M. Kaplan speaks from the floor of the New York State Senate on the passage of the Holocaust Education Bill.