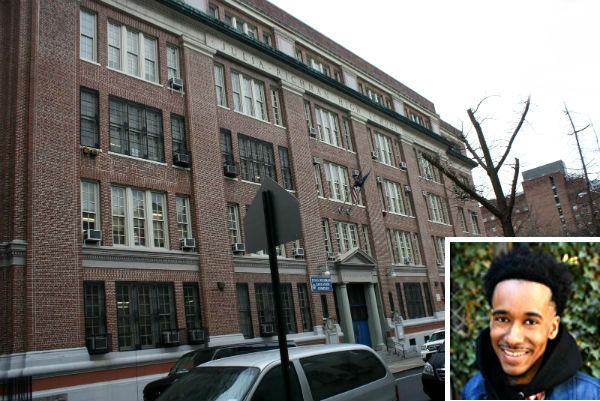 The award provides a full scholarship for the Stella and Charles Guttman Community College sophomore to attend a study abroad program in London, England this summer.

Bing, a Liberal Arts major, said he hopes to use the experiences from studying abroad to further his goal of improving the social and life skills of children through one of his own passions — skateboarding.

“Skateboarding has gotten me through a lot of stressful times,” said Bing. “I always felt I could be free on my board, and no one was controlling me or restricting me, and it also taught me discipline, determination, and being able to accept failure and to keep trying after a mistake has been made.”

Bing added: “I am an avid skateboarder who has always tried to find ways to mesh my love of skating with ways to reach individuals to improve their skating skills while also helping them develop determination, perseverance, and not to quit in the face of failure. Since I was a young teen, I have been trying to find ways to create a career out of the things I love to do, such as skateboarding.”

In London, Bing said he plans to begin using skateboarding as a door to start dialogues and building community with others. Further, he said he want to start building an educational network of skateboarders and those interested in learning how to skate.

The Fellows were nominated by their college presidents and selected during a national competition. The winners have demonstrated high academic achievement, possess exemplary communication skills, display the hallmarks of self-determination, exhibit characteristics of bold leadership, and have a history of service to others.

Of the 332,727 US college students who studied abroad in 2017, less than 30% were students of color — 0.4% American Indian/Alaskan Native, 4.3% multiracial, 6.1% African American, 8.2%Asian/Pacific Islander and 10% Hispanic Americans, according to data from the Institute of International Education.

The winners will use their experiences to motivate other under-represented students to pursue opportunities to study abroad. Of the 332,727 US college students who studied abroad in 2017, less than 30% were students of color — 0.4% American Indian/Alaskan Native, 4.3% multiracial, 6.1% African American, 8.2%Asian/Pacific Islander and 10% Hispanic Americans, according to data from the Institute of International Education. The data shows that students of color largely miss out on international education experiences that can play a critical role in their personal growth, as well as academic and career success.

The Frederick Douglass Fellowship, which launched in 2017, is representative of efforts by CIEE and CMSI to increase diversity in study abroad by breaking down the barriers of cost, curriculum, and culture that prevent students from participating in international education experiences. Named for the African American social reformer, abolitionist, orator, writer, and international statesman Frederick Douglass, the Fellowship encourages students to use his life as a model to becoming bold, globally conscious and service-oriented leaders.

“The students selected for the Frederick Douglass Global Fellowship are ten exemplary student leaders who demonstrate the iconic leadership, keen intellect, and natural change-agent attributes of Frederick Douglass,” said James P. Pellow, President and CEO of CIEE. “These students will be the next generation of leaders and I know that the intercultural competence and global perspective they will gain during the London program will benefit them throughout their lives.”

The Penn Center for Minority Serving Institutions brings together researchers and practitioners from Historically Black Colleges and Universities, Tribal Colleges and Universities, Hispanic Serving Institutions, and Asian American and Native American Pacific Islander Serving Institutions. The Center’s goals include: elevating the educational contributions of MSIs; ensuring that they are a part of national conversations; bringing awareness to the vital role MSIs play in the nation’s economic development; increasing the rigorous scholarship of MSIs; connecting MSIs’ academic and administrative leadership to promote reform initiatives; and strengthening efforts to close educational achievement gaps among disadvantaged communities. For further information about the Center, please visit www.gse.upenn.edu/cmsi

CIEE, the country’s oldest and largest nonprofit study abroad and intercultural exchange organization, transforms lives and builds bridges by promoting the exchange of ideas and experiences. To help people develop skills for living in a globally interdependent and culturally diverse world, CIEE sponsors a wide variety of opportunities for cultural exchange, including work exchange programs, teach abroad programs, and a worldwide portfolio of study abroad and internship programs for college and high school students. Visit www.ciee.org.