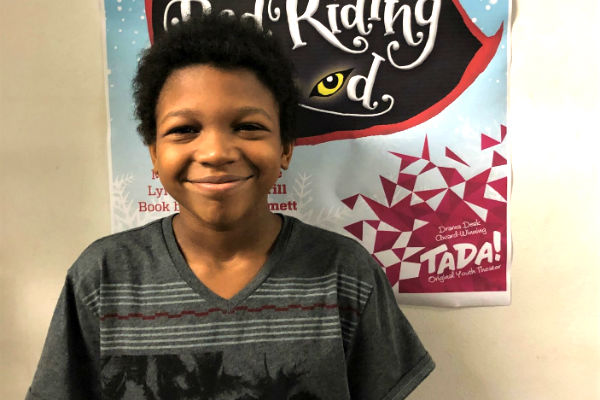 , running from November 23 through December 15, 2019, at TADA! Youth Theater, is a hilarious take on the Red Riding Hood story told from the wolf’s point of view. The book is by Robert Emmett, lyrics by Bob Merrill and music by Jule Styne. TADA! was the first company to perform this musical on stage. It was originally produced as a TV special in 1965 featuring Liza Minnelli, Cyril Richard and Vic Damone.

Hakiem Porter, a 13-year-old from Harlem, will be playing Lancelot in The Dangerous Christmas of Red Riding Hood. He explains, “Lancelot is a wolf. He doesn’t trust humans and doesn’t want to make friends with humans. I like stepping out of a human role to play something different, and I get to try something new.”

Hakiem continues, “Theater lets me escape my daily troubles. TADA! puts a smile on my face. I want to pursue theater as a potential career. Theater lets me speak up and have a voice. It teaches you how to respect yourself and how to gain confidence in yourself.” Hakiem is in the 8th grade at Harlem Prep Middle School in Manhattan.

Since 1984, TADA!’s mission is to inspire young people from different backgrounds to be creative, learn, and think differently through high-quality musical theater productions and educational programs. A unique Drama Desk award-winning nonprofit youth theater, TADA! produces original musicals for children, teens, and family audiences. TADA! offers a free, year-round, pre-professional training and positive youth development program for its Resident Youth Ensemble (ages 8-18); musical theater classes/camps for the public; as well as musical theater residencies in NYC schools and community centers. Through high-quality work, young people’s self-confidence and creativity are enhanced. They also develop advanced skills in leadership, communication, responsibility, collaboration, and problem-solving– skills that help with growing up and are essential to their success both in school and in life.