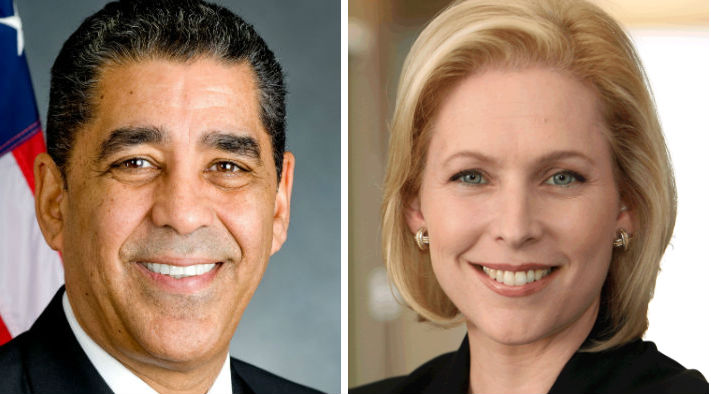 This legislation would establish a museum and education center at the African Burial Ground in Lower Manhattan, a site that currently holds the remains of an estimated 15,000 free and enslaved Africans and early-generation African-Americans from the colonial era. The museum would be managed by the National Park Service in consultation with the African Burial Ground Advisory Council, which would be established by the legislation.

“The African Burial Ground is culturally and historically significant to New York and the nation. The establishment of a museum and an education center at this cemetery will illuminate the plight, courage, and humanity of the free and enslaved Africans who helped create New York,” said U.S. Senator Charles Schumer. “As a nation, we must always remember the tremendous burdens and afflictions experienced by those who were brought here in bondage, and who fought – for generations – against impossible odds to achieve the full measure of dignity and equality and justice that they were due. I am proud to cosponsor this legislation and I urge my colleagues to pass this bill and for the president to sign it into law.”

“The African Burial Ground serves as a tribute to the enslaved and free African men and women who lived in and helped build New York. Establishing a museum and an education center at this location would memorialize their stories and protect their legacies,” said U.S. Senator Kirsten Gillibrand. “This is an important part of New York’s history that deserves to be recognized. I am proud to work with my colleagues in the New York delegation to introduce this legislation and urge my colleagues in Congress to pass this bill.”

“On the site of the African Burial Ground lie the remains of thousands of free and enslaved early African residents of New York, making it a site of the utmost historical and cultural significance for New York City and the United States,” said Congressman Jerrold Nadler (NY-10). “A Memorial Museum and Education Center on those grounds will pay respects to the thousands buried there, acknowledge the central role that enslaved and free African men and women played in building New York City from its earliest history, and educate Americans and other visitors about the profound and far-reaching impact of slavery on American society.”

“From the beginnings of our colonial past too long after the formation of our union, enslaved Africans and their descendants have endured bondage and forced labor, followed by segregation and discrimination in America. Their resiliency should be commemorated, and their plight: never forgotten. Constructing the African Burial Ground Memorial Museum will serve to commemorate their bravery, remind us how long the journey towards justice has been, and contextualize the historical roots of the inequities that still persist to this day,” said Congressman Gregory Meeks (NY-06).

“The sacred African Burial Ground Memorial Museum and Education Center will serve as a tool to educate our communities on the long-lost history of the enslaved and freed African-Americans, whose labor ultimately built the City of New York. Amid the fight for equity, justice and fairness, we must shed light on the human rights violations that occurred in both colonial and federal New York City during the 17th and 18th centuries. This history deserves to be honored, remembered and studied by all Americans to ensure that such cruelties never occur again,” said Congresswoman Yvette D. Clarke (NY-09).

“This year marks 400 years since the first African slaves were brought to the United States and the beginning of one of the darkest periods of our nation’s history,”

“This year marks 400 years since the first African slaves were brought to the United States and the beginning of one of the darkest periods of our nation’s history,” said Harlem Representative Adriano Espaillat (NY-13). “Establishing the African Burial Ground International Memorial Museum and Educational Center in New York City, where the remains of nearly 20,000 enslaved Africans and early-generation African-Americans from the colonial era are buried, is a tremendous way to reflect on the significant suffering and injustice slavery had throughout the United States. We can never forget the horrors that were inflicted through slavery, and the African Burial Ground Memorial will play a vital role in our ability to better understand the past and honor the history that all groups of people have had on American culture and our continued crusade for freedom and justice for all.”

The African Burial Ground is a cemetery located in lower Manhattan that holds the remains of approximately 15,000 free and enslaved Africans from the 17th and 18th centuries. It is the oldest and largest known burial ground in North America for free and enslaved Africans. The African Burial Ground serves great historical, cultural, archaeological and anthropological significance. The burial ground includes DNA samples from the remarkably well-preserved human remains that will enable researchers to trace the home roots in Africa of those individuals buried at the ground. The site became a National Historic Landmark in 1993 and was designated as a national monument in 2006.