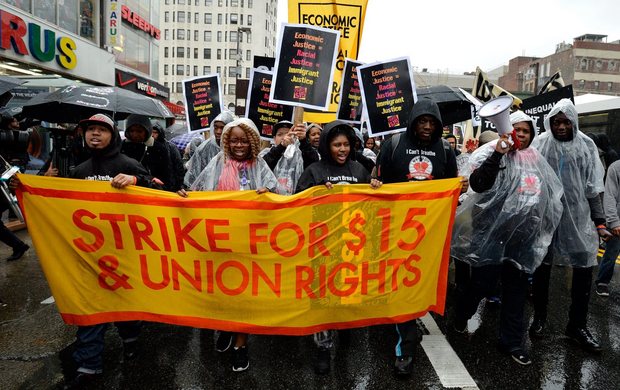 The law goes into effect on July 4, 2021, and that resources for employers and employees are now available.

Under the new law, fast food employers cannot fire or lay off workers, or reduce their hours by more than 15 percent without just cause or a legitimate economic reason.

The just cause law adds critical new job protections for fast-food workers in addition to the existing fair scheduling protections under the City’s Fair Workweek Law.

“For too long, fast food workers—a predominately minority and female workforce—have been treated as if they were disposable and yet they have been there for us on the frontlines throughout the pandemic,” said DCWP Acting Commissioner Sandra Abeles. “These workers deserve better and no worker should be left jobless for unjust reasons – ever. This vital law will bring additional stability to the lives of these low-wage workers and ensure they can’t be fired on a whim.”

Under the new just cause law, fast food employers:

The just cause protections go into effect on July 4 and workers can immediately enforce their rights in court through a private right of action. DCWP will begin enforcing the just cause law on September 2, 2021.

Beginning in January 2022, workers also can request to resolve their complaints through binding arbitration by a DCWP administered panel of arbitrators.

Under the Fair Workweek Law, which went into effect in November 2017, fast food employers in New York City must also give workers regular, predictable general schedules, two weeks’ advance notice of their work schedules covering specific dates, premium pay of between $10-$75 for schedule changes, and the opportunity to work newly available shifts before hiring new workers.

Fast food employers also cannot schedule workers for a morning shift the day after a night shift unless workers consent in writing and are paid a $100 premium to work the shift. Similarly, fast food employers must obtain workers’ written consent before adding any time to their work schedules with less than two weeks’ notice and may not penalize them for declining to work.

Under the Law, retail employers must also give workers advanced notice of work schedules and may not schedule workers for on-call shifts or change workers’ schedules with inadequate notice.

Fast food employers must post the new NYC Fast Food Workers’ Rights Notice in English and any language that is the primary language of at least five percent of the workers if available on the DCWP website.

Employers and employees can visit nyc.gov/workers or call 311 (212-NEW-YORK outside NYC) for the new Notice, which will soon be available in 16 languages, as well as an overview of the law, information about the required progressive discipline policy, templates, and soon-to-be added FAQs about the law.

Starting this month, DCWP will be conducting a series of educational walks and roundtables to educate workers and employers about the new protections.

“Essential fast food workers deserve protection from unjust firings or reduction of hours, so I’m thrilled that the “just cause” legislation I championed will go into effect on July 4,” said Council Member Adrienne Adams. “This new law will have a profound impact on the lives of many of our frontline workers and their families, and I look forward to seeing it fully implemented.”

“No longer should fast food workers have to fear that a boss’ bad mood or a small mistake will cost them their livelihood.” said Council Member Brad Lander. “Just cause protections will bring much needed job security and stability to fast food workers, a workforce that is predominantly women and people of color. I look forward to working with DCWP and worker advocates to ensure that workers know their rights and are protected from unjust firings.”

Related:  The Cathedral Of St. John The Divine Presents Its Annual Christmas Concert In Harlem

32BJ SEIU President Kyle Bragg said, “The 175,000 members of 32BJ SEIU are proud to have fought alongside fast-food workers to win historic just cause protections that will help turn fast food jobs into good jobs with stable hours. The workers who keep New Yorkers fed shouldn’t have to worry about whether they’ll be able to put food on their own tables because they can be fired or have their hours cut for any reason or no reason at all. Just cause protections for fast food workers means that bosses can no longer use at-will employment to keep workers silent in the face of injustice.”

“The new Just Cause provision signifies a major boost to the protections that the tens of thousands of NYC fast food workers were enjoying under the local Fair Workweek Law,” said Maria Figueroa, Director of Labor and Policy Research at the Worker Institute, Cornell University-ILR School. “This new provision not only grants workers with protections against wrongful discharge, but also empowers them to exercise their workplace rights without fear of retaliation. The enactment and implementation of Just Cause is an example of effective local level policymaking to achieve worker protections. The hope is that additional cities across the country will replicate this approach to improve labor standards in the fast food industry.”

“With its new “just cause” law, New York is leading the nation in providing fast food workers badly needed relief from unfair firings. And the City’s outstanding Department of Consumer and Worker Protection can be counted on to help employers and workers understand their rights under this important new law,” said Paul Sonn, State Policy Program Director at the National Employment Law Project.

“After facing unimaginable risks during the pandemic, fast food workers in NYC will no longer have to toil in fear that a manager’s bad mood will mean the end of their livelihood,” said Rachel Deutsch, Director of Worker Justice Campaigns at the Center for Popular Democracy. “New York City’s “just cause” protections will have an immediate impact because fast food workers have been powerfully asserting their rights under the Fair Workweek Law and DCWP has been a national leader in holding lawbreaking companies like Chipotle accountable. Other cities should follow suit and protect low-wage workers from arbitrary firings.”

“For years, countless workers across the city have faced the constant threat of being fired for arbitrary reasons or no reason at all,” said Jose Lopez, Co-Executive Director of Make the Road New York. “We hear all the time from workers whose bosses have, overnight and for no good reason, destroyed their livelihood and left their family in desperate straits. The city’s Just Cause law will require that employers play by a fair set of rules when it comes to firings and hours reductions—exactly what all workers deserve in their jobs.”

“A Better Balance applauds the protections afforded fast food workers by the just cause provisions of the Fair Workweek Law that go into effect on July 4. Congratulations to all those who worked so hard to enact this law and to the fast food workers who will benefit from it. Thanks to DCWP for getting the word out about these protections so that all covered workers can benefit from them,” said Sherry Leiwant, Co-President and Co-Founder, A Better Balance.

For more information about DCWP and its work, call 311 or visit DCWP at nyc.gov/dcwp