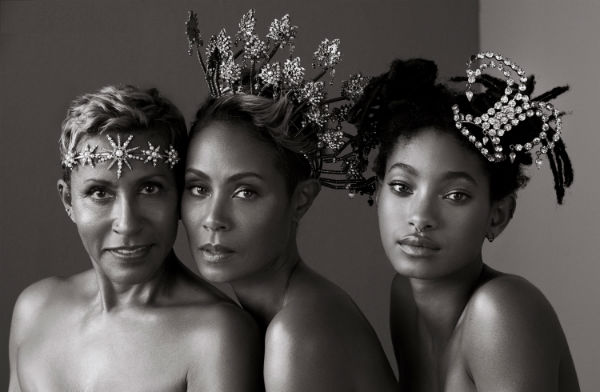 In the trio’s first fashion photoshoot and interview together, mother, daughter, and open up about the power of intergenerational conversation, keeping up appearances in the public eye and what inspired them to create Red Table Talk.

Jada on helping women own their power:

Jada on keeping up images and appearances in the public eye—and what inspired her to create Red Table Talk:

“I think people are really tired of that, and see that’s not working. It’s not worth it. It costs too much. That, for me, is what also inspires me to share my experiences, because women who’ve had the courage to share their experiences with me could change my life in the biggest way, you know?”

Willow on what she’s learned from her mother and grandmother about love:

“That it takes attention and work and that it’s not just love. It’s like diamonds … a love is there, but then you just gotta keep nurturing it.”

Willow on her music, which she’s been creating since she was 10:

“Obviously, it’s a very feminine energy that comes through my music, but I want it to be all-inclusive. I want men to feel welcome to come to that side as well.”

Adrienne, called “Gammy,” or “Gam” by her offspring, on her first-ever photo shoot:

“They’re not used to me in this world, so it’s been an adjustment for my family. There’s still that group that kind of looks at you like, ‘Oh, that’s Jada’s mom!’—I’ve been going through that for years, so it’s all good.”