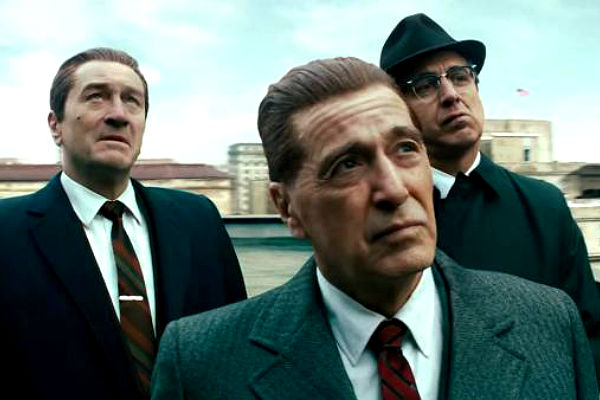 The Irishman (titled onscreen as I Heard You Paint Houses

, the film is directed and produced by Martin Scorsese and written by Steven Zaillian, based on the 2004 book I Heard You Paint Houses

, and Joe Pesci, with Ray Romano

in supporting roles. The film follows Frank Sheeran (De Niro), a truck driver who becomes a hitman and gets involved with mobster Russell Bufalino (Pesci) and his crime family, including his time working for the powerful Teamster Jimmy Hoffa

In September 2014, after years of development hell, The Irishman

was announced as Scorsese’s next film after Silence (2016). De Niro, who also served as producer, and Pacino were confirmed that month, as was Pesci, who came out of his unofficial retirement to star after being asked numerous times to take the role. Principal photography began in September 2017 in New York City and in the Mineola and Williston Park sections of Long Island

and wrapped in March 2018. With a production budget of $159 million and a runtime of 209 minutes, it is among the most expensive films of Scorsese’s career, as well as his longest.

on September 27, 2019, and began a limited theatrical release on November 1, 2019, followed by digital streaming on Netflix

starting on November 27, 2019. The film was praised for Scorsese’s direction and the performances of De Niro, Pacino, and Pesci.