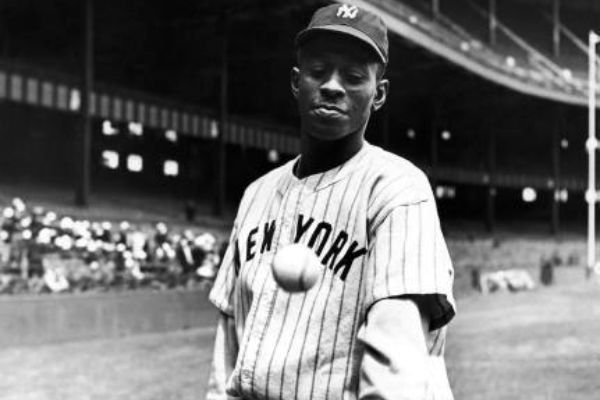 With complete swagger in motion is one of baseball’s most charismatic cats, Satchel Paige. After he played baseball in Puerto Rico with the Brujos de Guayama (the Guayama Witch Doctors) he moved to New York City.

Paige returned to the Travelers for the 1940 season. Abe and Effa Manley, owners of the Newark Eagles, still claimed that they still held the rights to Paige’s Negro league contract, and retaliated against Wilkinson by signing players from Wilkinson’s Negro American League. In late June, the NNL and NAL leaders met to discuss the situation and reached an agreement that allowed Paige to advance to the Kansas City Monarchs and let the Manleys keep the players they had recruited in violation of the inter-league rules.

Late in the 1940 season, Paige was promoted to the Monarchs. On September 12, Paige made his debut with the Monarchs against the American Giants and pitched a five-inning darkness-shortened complete game. The Monarchs won 9–3 and Paige struck out ten.

Because of Paige’s strong gate appeal, there was considerable demand by outside teams to lease Paige’s services to pitch for a single game. With infrequent league games, Wilkinson booked Paige to pitch for small-town teams or other Negro league teams at rates ranging from a third of the total receipts to a fixed fee $250 to $2,000 per game, plus expenses. Wilkinson purchased a Douglas DC-3 airplane just to ferry Paige around to these outside appearances.

Because of the larger gate when Paige pitched, the Monarchs’ owners could also insist on a larger share of the receipts from their road games. Wilkinson and Paige each kept a share of the fees. By the early 1940s, Paige’s estimated annual earnings were $40,000, which was four times the pay of the average player on the major league New York Yankees and nearly matched the pay of their top star, Joe DiMaggio. 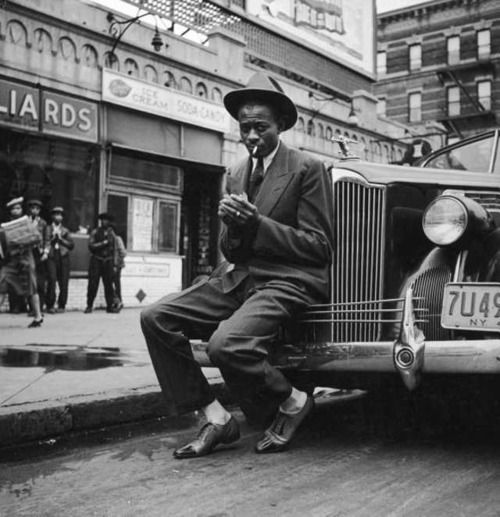 Hoping for some publicity for Paige, who had received relatively little coverage while pitching in the hinterlands with the Travelers, Wilkinson arranged for Paige to pitch on the opening day of 1941 for the New York Black Yankees in Harlem, NY

Appearing in front of a crowd of 20,000 fans at Yankee Stadium, Paige pitched a complete game, 5–3 victory, striking out eight. As intended, the contest brought considerable coverage from both the black and white media, including a pictorial by Life magazine.

Paige took over the role of ace pitcher for the Monarchs, while Hilton Smith, their former ace, dropped to number two pitcher and sometimes was relegated to relieving Paige. Because of Paige’s ability to draw a crowd, he would often be scheduled to start a game and pitch for three innings, with Smith or another teammate assigned to pitch the last six. In addition to Smith, Paige’s teammates included first baseman Buck O’Neil, shortstop and manager Newt Allen, and center fielder Willard Brown.

In 1941, the Monarchs won their third consecutive Negro American League championship. Though no standings were published, according to historian John Holway, they had a 24–6 team record for a winning percentage of .800, placing them five games ahead of the second-place New Orleans/St. Louis Stars.

On August 1, 1941, Paige made his first appearance in the East–West All Star Game in five years, collecting 305,311 votes, 40,000 more than the next highest player, Buck Leonard. Paige entered the game at the start of the eighth inning with the East leading 8–1 and pitched the last two innings. The only hit he gave up was a slow roller to the NNL’s new starting catcher, the Baltimore Elite Giants’ Roy Campanella.

With America’s entrance into World War II, Dizzy Dean came out of retirement, forming an all-star team consisting of recently drafted white major league and minor league players. On May 24, Dean faced Paige and the Monarchs in an exhibition game at Wrigley Field, the first time a black team ever played at Wrigley. The Monarchs defeated Dean’s All-Stars 3–1 in front of a crowd of 29,775.

On May 31, Paige teamed up with the Homestead Grays to face Dean’s All-Stars again before 22,000 fans at Griffith Stadium. The Grays won 8–1, with Paige striking out seven (including Washington Senators star Cecil Travis) in five innings of work.

In the 1942 East-West All-Star Game, Paige entered in the top of the seventh with the score tied 2–2. Pitching the last three innings, he allowed three runs on five hits and was charged with the loss in the 5–2 game.

Paige died of a heart attack after a power failure at his home in Kansas City on June 8, 1982. He is buried on Paige Island in the Forest Hill Memorial Park Cemetery in Kansas City.