It may not seem so to outsiders, but New York City is really a collection of small towns with residents and businesses connected in the most surprising ways. Just ask David Daniels.

Late last summer, Mr. Daniels, an associate broker with the Corcoran Group in the West Side office, got a call from colleagues in the company’s Brooklyn Heights branch. They were in the process of securing a listing for the estate sale of a townhouse in Harlem, and realized that showing a property so far uptown would be difficult for them.

“They were looking for someone within the company to list it with, someone who knew Harlem, had experience selling townhouses and experience with estate sales, and my name came up when they were canvassing managers in our branch offices,” said Mr. Daniels, 51, who had reason to believe he was the man for the job. A longtime Harlem resident and a student of Harlem history, he was a 15-year veteran of the business who had rented and sold countless properties in the area.

With that résumé, the Brooklyn Heights brokers wanted him aboard. And that’s when they gave him the particulars of the property. It was the Marion Daniels & Sons Funeral Home, three contiguous townhouses at 164 West 136th Street.

There was a moment of silence, Mr. Daniels said, while he absorbed the information. “Then,” he said, “I told them, ‘Marion Daniels was my great-grandmother.’ ”

Because there was no conflict of interest — the property had long since been passed to Mr. Daniels’s second cousin Theodore Daniels Jr., a man he knew only slightly, and then in 2011, to Theodore’s stepson, a man he didn’t know at all — the Brooklyn brokers’ reaction was overwhelmingly positive.

As Mr. Daniels said, they “were like, ‘Marion was your great-grandmother? All the more reason you should be the one to sell it.’ ”

Mr. Daniels never met his great-grandmother. “But there was a photograph of her in my house when I was growing up,” he said. “I know she was thought of as a genteel woman and very gracious, but a very successful businesswoman, and everyone had a lot of respect for her.”

Marion Daniels and her husband, Orlander Daniels, had four children, including Rolfe Lee, Mr. Daniels’s grandfather. They went into the mortuary business in 1905, renting space on West 61st Street and later on West 134th. In 1912, after Orlander Daniels died of a heart attack, Mrs. Daniels bought the first of the three townhouses she would own on 136th Street. Its top two floors became the family residence; the two lower floors were Marion Daniels & Sons Funeral Home. 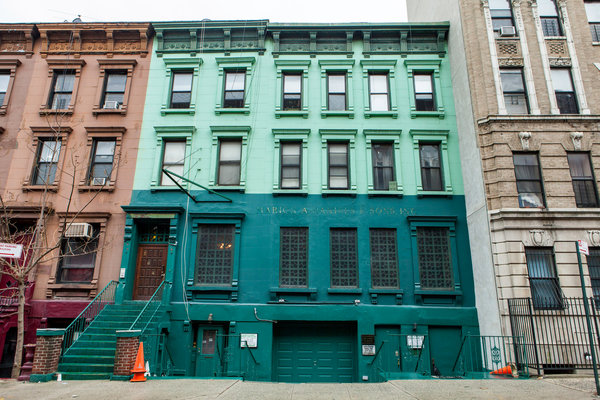 The Danielses were among the first black residents of Harlem. In the early years of the 20th century, few buildings allowed blacks as tenants. Mr. Daniels said.

That they were there at all may have been because of the efforts of Philip A. Payton Jr., a black real estate agent and property manager. Mr. Payton, who was known as the father of Harlem, “jousted with recalcitrant white owners,” wrote Christopher Gray in a 1991 Streetscapes column in The New York Times. “In one case, he sold some buildings to a white syndicate which unexpectedly evicted the black tenants. Payton then bought two nearby apartment houses and filled them with blacks. In this way, block by block, Harlem became a black community.”

That community included Madame C. J. Walker, one of Mrs. Daniels’s neighbors and the millionaire creator of beauty and hair-care products for black women, who lived with her daughter, A’Lelia, in a grand home fashioned from a pair of rowhouses at 108-110 West 136th Street. (A’Lelia Walker, a key figure in the Harlem Renaissance, would later become close to Rolfe Lee Daniels, and to the poet Langston Hughes, a distant Daniels relative.)

Another neighbor was the pastor of the A.M.E. Zion Church, Benjamin C. Robeson, Mrs. Daniels’s dear friend and a brother of Paul Robeson, the singer, actor and activist.

MR. DANIELS GREW UP on Long Island, but often visited his relatives in Harlem. In the late 1960s, he said, it was still a place where men dressed in suits and women wore their Sunday best, even when it wasn’t Sunday.

On one such visit, he accompanied his paternal grandmother, Dora, who is now 105, to 164 West 136th Street. “I remember there was a really old safe in the building,” he said. “It looked like something you’d see in a movie Western, so it really interested me.”

As an adolescent, he learned some family history. After Mrs. Daniels’s death in 1940, his great-uncle Theodore Daniels Sr. bought out his grandfather’s interest in the business, and his grandfather opened his own funeral home on St. Nicholas Avenue. “Marion Daniels & Sons Inc.” remained written in gold block letters on the facade of 164 West 136th Street, however, and as an adult, Mr. Daniels frequently pointed out the building to friends.

Fifteen or 20 years ago, he said, he passed by and noticed the office door was open and his cousin Theodore Jr. was working inside: “I popped in and reminded him who I was, and we sat and talked for a while.”

Those memories contributed to the sense of poignancy he felt when he got the exclusive listing last fall, along with a set of keys.

“It was the weirdest thing to be unlocking the door and walking in,” he said. “The more familiar I became with everything — going up and down the stairs, turning the lights on and off — the more interesting it became to me. I thought it was so strange that I was becoming so familiar with this place.”

Although he found some ornate lamps from the old funeral home in the basement, and the safe he remembered from his childhood was in the same place on the parlor floor, much had changed. When the building was renovated in the 1950s, the two floors that had been home to his family were converted into five apartments. “The only thing I could see that was original to the building was the wooden door to the backyard,” he said.

But one thing remained constant. “Anytime I planned to show the property,” he said, “I had to call first because there were still funerals going on there.”

The property went on the market in September at $3.3 million, and investors bought it for $3 million. Mr. Daniels was there at the closing in mid-March to watch the old place change hands. “I definitely wouldn’t have missed it,” he said.

“All I could think about as I sat there was that my great-grandmother’s business lasted 110 years,” he added. “But everything changes; everything comes to an end. I felt like this was a special opportunity — to be the one who got to wrap up what Marion started and tie it with a bow.”

Photo credit: 1) An old photograph shows a wedding that took place at the property in about 1920. 2) David Daniels, an associate broker with the Corcoran Group, with a photograph of his great-grandmother in front of the Harlem property that was once h.er home and business. CreditEmon Hassan for The New York Times 3) The three contiguous townhouses being offered for sale are located at 164 West 136th Street.CreditEmon Hassan for The New York Times (source).